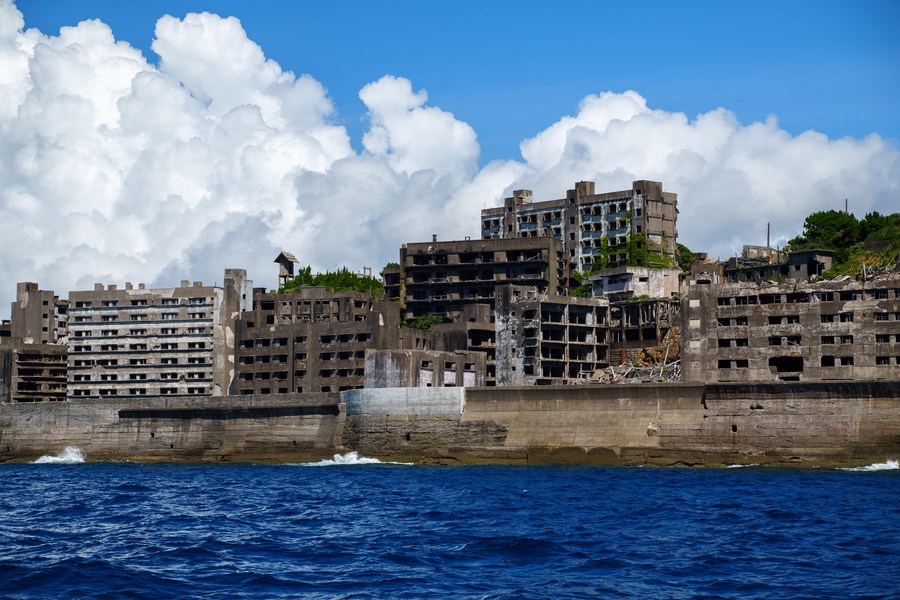 Photo taken on Aug. 8, 2022 shows the island of Hashima in Japan. (Xinhua/Zhang Xiaoyu)

Hashima Island was a place where tens of thousands of Chinese and Korean laborers were forced into slavery by Japan during its war of aggression, however, the history of forced labor crimes was ignored by the guide and tour guides there.

TOKYO, Aug. 15 (Xinhua) — “There was no forced labor here,” a tour guide openly said at Hashima, the fortress island near Nagasaki where visitors are supposed to learn about the history of forced labor crimes.

In 2015, Japan’s Meiji Industrial Revolution sites, including Hashima Island, were declared a World Cultural Heritage Site amid huge controversy, as the island was a place where tens of thousands of workers Chinese and Koreans were forced and enslaved by Japan during its war of aggression.

In Hashima’s guide, there is a glaring omission in the long timeline of history from the Meiji period, with only two records covering the 30-year period from 1925 to 1955 — The Coal Production of island peaked at 411,100 tons in 1941, and that the island was torpedoed by American forces in 1945.

It didn’t talk about the laborers who were forced to work here during the Japanese invasion period or the death toll among the laborers, not to mention “North Korea” or “China” in the guidebook.

Historical records show that the Japanese conglomerate Mitsubishi used large numbers of Korean laborers to start mining at Hashima in 1939. Beginning in 1943, Mitsubishi forced Chinese prisoners of war captured by the Japanese army to be enslaved there, where hundreds of Chinese and Korean workers were killed.

The history ignored by the guide was obviously not touched upon by the ship’s guide either. The guide told visitors that the coal and ore mined on the island not only provided rich minerals for Mitsubishi shipyards and steel mills, but also contributed greatly to the modernization of Japan as a whole.

Photo taken on Aug. 8, 2022 shows the island of Hashima in Japan. (Xinhua/Zhang Xiaoyu)

As the ship approached, the island, also known as Battleship Island because of its appearance, looked like a black iron beast on the sparkling sea, where the buildings looked like turrets on the deck of a battleship.

While the guide flaunted the facilities that he believed supported the early history of modern Japanese architecture, there was not the slightest sympathy for the dead workers, let alone condemnation of the slavers. .

When asked if he tells tourists about this story, the guide replied with “Sorry, I don’t know this story” and “I share what the company told us”.

In fact, telling the full story of forced labor at the Hashima Coal Mine on the island was a commitment Japan made to UNESCO when it applied for a World Heritage Site. However, after the successful application, the Industrial Heritage Information Center of Japan presented testimonies and documents that deny that Japan had forcibly brought in workers, which caused deep disappointment and strong protests within the international community.

In July 2021, a World Heritage Committee resolution “deeply regrets” that Japan did not fully inform the history of the forced recruitment of Korean workers and others when promoting Meiji Industrial Revolution sites. , such as Hashima Island or the Battleship. Island, and pointed out that the Japanese government had failed to honor its commitment to the international community during the bid process.

The resolution also called on the Japanese government to consider steps to disclose that many workers were forcibly brought to the coal mine from the Korean Peninsula and forced to work under harsh conditions, and to submit a report by December 1, 2022, to explain what he intends to do.

As the sea voyage around Hashima Island came to a halt, someone shouted, “There is no history of forced labor here!” This voice was not from the tour guide, but apparently from some Japanese visitors on the cruise.■