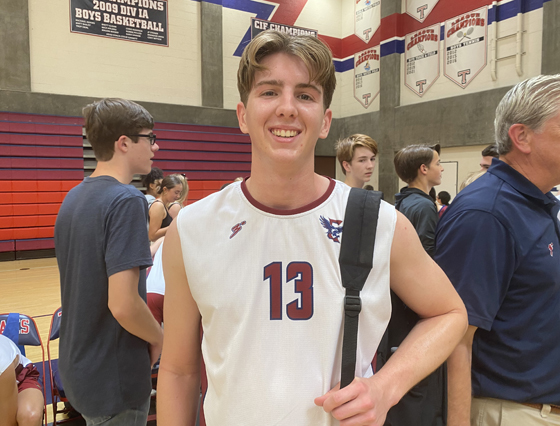 The Eagles will face San Joaquin League rival St. Margaret’s in the final on Saturday, May 14 at a venue to be determined.

“Every year it’s a complete miracle. There are so many things that come into play,” Eagles second-year coach Ryan Van Rensselaer said. “I never take it for granted. I’m just grateful and we take it one game at a time.

CVC’s strategy on Saturday was simple: serve well to get Portola out of their attacking game plan.

CVC had four aces in the first set and the game plan paid off.

“We knew who their threats were and our whole plan was to slow them down,” Van Rensselaer said. “Serve them hard and get them out of the system. Once we locked ourselves in and the nerves went away, we started playing like that and took over.

Vanguard signee Andrew Sheveland was dominant on serve and had three aces in the opening set and several kills. Hawaii signee Kai Taylor was battling a shoulder injury but was pivotal in the Eagles offense with his shots and serve.

Taylor hadn’t swung recently and was battling the stomach flu earlier this week.

“It’s always like that. Every game you don’t know who you’re going to have or how it’s going to go,” Van Rensselaer said. “I’m so proud of Andrew and Kai. They both did an amazing job carrying these guys and keeping things positive.

Blake Sheveland also had a great game with a handful of kills and much of CVC’s offense was set up by setter Max Stegelvik.

Portola (24-11) was the third team in the Pacific Coast League this season. The Bulldogs defeated CVC’s league nemesis Pacifica Christian in five sets in the quarterfinals.

The Bulldogs’ top two scorers, Kian Wojtowich and Eugene Jung, were effective and Noah Luper had a handful of blocks.

The game was moved to Tesoro High at Portola’s request as the expected crowd was larger than the capacity of CVC’s home gymnasium.

CVC have won both league matches against St. Margaret’s this season, but the final match went to five sets.

“It would be great to play against St. Margaret’s,” Van Rensselaer said after beating Portola. “They’re a really good team and coach (Bob) Yoder is phenomenal.”