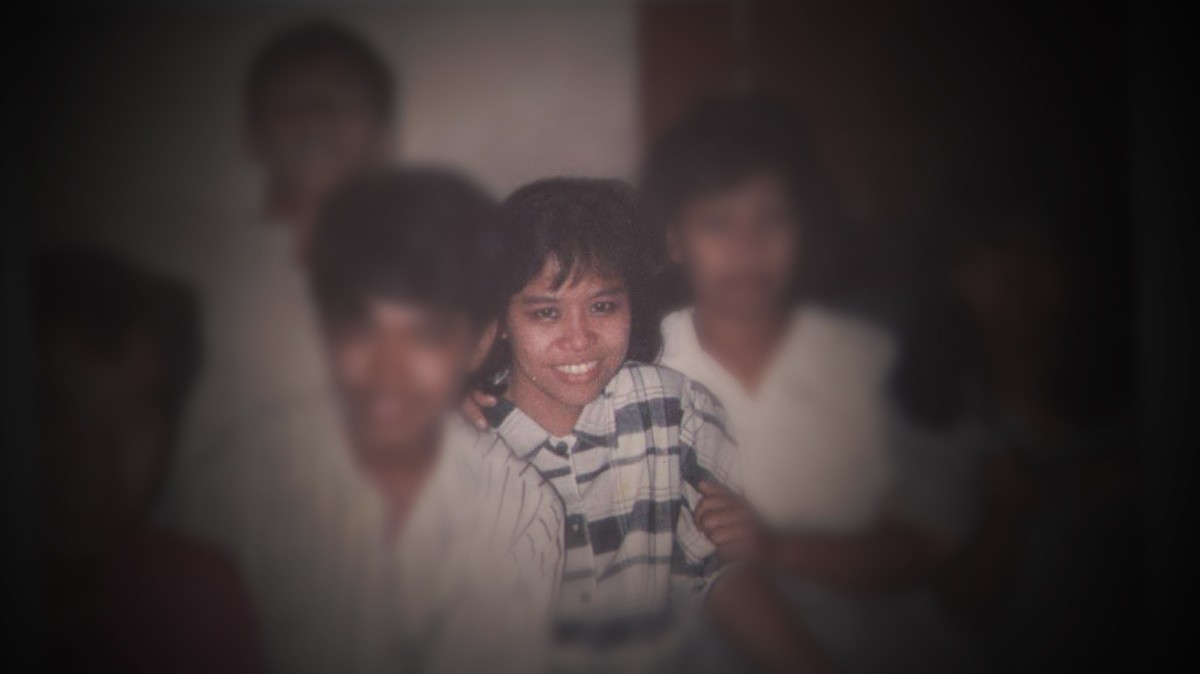 My mother with college friends in 1986. Photo: Courtesy of Anna Bernice delos Reyes

“We climbed those gates, the day Ferdinand Marcos was ousted,” my mother said as we entered Malacañang Palace on a school outing. I was about 10 years old and had just learned about martial law in the Philippines under the Marcos dictatorship. As our guide’s voice faded, my mother dimly recalled the final hours of the EDSA People Power Revolution that toppled Marcos on February 25, 1986. A time when she, along with her siblings and many other Filipinos, occupied the streets and stormed the presidential palace, braving a sea of ​​soldiers and military tanks.

My mother is my first teacher. Deciding to homeschool me and my siblings during our primary school years, she made sure we learned about the dictatorship she lived through and inherited the collective memory of our countrymen. In my young and naive mind, it seemed distant; a freedom revolution in the past. In his words, they fought so that we didn’t have to. We relied on his words that such a moment would never happen again.

“In my young and naive mind, it seemed distant; a freedom revolution in the past. In his words, they fought so that we didn’t have to. We relied on his words that such a moment would never happen again.

Since that field trip, however, she and my father have not once recounted their personal experiences of life under military rule. They hoped to protect us from the trauma and fear of their youth.

But I always wondered. As I watched the run-up to the 2022 Philippine presidential elections from the guilty comfort of living abroad and simply through my screen, I thought of my parents’ anguish and anxiety over seeing the son and namesake of the former dictator fighting to rule our country. I quickly learned about Ferdinand Marcos Jr.’s propaganda machinery and disinformation plans, but at the same time I was filled with hope of other candidates’ grassroots campaigns to mobilize the country for a better future. Watching what feels like a deja vu election, my parents were filled with hope that “people power” would prevail.

However, as Marcos Jr.’s impending inauguration approached, hearing the phrase “President Marcos” once again triggered memories of a past my parents didn’t want to remember.

So I finally asked them how the time of martial law under Marcos Sr. really transpired through their eyes.

Marcos Sr. ruled the Philippines from 1965 to 1986, a period marked by violence, murder and suppression of free speech. My parents spent much of their youth during the dictatorship, which began a few years before Marcos Sr. declared martial law in 1972. Seeing soldiers and army trucks patrolling the streets was part of their daily life.

“We lived near Malacañang Palace,” my mother Alma explained. “Our neighbors always told us not to walk too far from our house because we risked being captured and imprisoned by men in uniform.” To cope, my mother’s uncles learned to befriend the soldiers who patrolled their streets, to ensure that their family would not fall victim to their unpredictable assault.

As a child, my mother “was afraid without [her] mom at school. “There was always [military] men in uniform. I was scared [they] would pick me up if she wasn’t there,” she said.

Fear of the military grew as people grew accustomed to stories of men being picked up from the streets to be beaten and jailed overnight. My great-uncle was one of them. To justify the brutality, the government used such stories to brainwash the masses that the people who were imprisoned and tortured were “bad” people who “deserved to be punished.”

My father (second from right) as a child during the reign of Marcos. Photo: Courtesy of Anna Bernice delos Reyes

My father, Geerminn, saw his worst fears materialize. His father was arrested and assaulted under the regime, resulting in his death.

“I was 3 years old,” he recalls. “A member of Metrocom (police force) was informed that my father was drunk… [the police] threw stones at [our] home. They arrested him, then assaulted and beat him inside the police station. [As it turns out]my father was mistaken for someone else and accused of [their] criminality.”

My father told me that at the time of his arrest, my grandfather “had recently had surgery on his right foot and was injured due to his tattoos having faded”. He was afraid of being mistaken for an ex-con, a stereotype then attached to anyone with a tattoo. They were considered “salot sa lipunan”, or a threat to society.

“The wound from his assault was infected with tetanus, which became the cause of his death,” my father said of my grandfather.

Such was the brazen violence of the military during martial law under Marcos Sr.

“Then curfew hours were put in place,” my father recalls. “Everyone had to be home by midnight, otherwise you’d be [jailed] for several days.”

Activities like drinking alcohol and demonstrating in the streets were prohibited; any criticism of the government or the Marcos was grounds for arrest without warrant. Despite this, street gangs quickly formed and caused riots with their homemade weapons, forcing my parents and their families to lock themselves indoors often.

It became normal for people in my parents’ life to “disappear”. Outspoken activists, like one of my mother’s high school friends, were abducted and never heard from again, while others were tortured and killed.

By the early 1980s, martial law had become part of my parents’ ‘way of life’, something they simply had to ‘live with’. But demonstrations and protests have also grown larger and more frequent, usually resulting in violence and arrests.

Starting college in 1984, my mother said it was common for universities to cancel classes because faculty and students joined in protest rallies. Student activists went “from room to room” in their university, recruiting others to attend rallies. My mother often joined in hopes of instigating change.

“Coming home from school on February 22, [1986], I saw several members of the army putting up valve wire barricades on the roads,” my mother recalls. “Then I heard people say, ‘Giyera na (it’s war), Marcos is going to be ousted!’ My [family] afraid. Talk of the possible ouster of President Marcos was on TV and radio. The soldiers had guns and surrounded our neighborhood.

“A few days later, our neighbors started walking towards Malacañang Palace. My older siblings, three uncles and I joined them. When we arrived [the palace], the guards were still on duty, preventing us from entering. So people climbed the doors to get in. My siblings and I took a chance and locked arms with several others who insisted on entering the palace.

It was the first time the public had accessed the presidential palace in over 10 years.

“The palace was huge,” she recalls. “We saw a lot of Imelda [Marcos’] scattered shoes and dresses. People were furious and destroyed the sets and many of Imelda’s belongings. The Marcos were gone when we arrived. Everyone kept singing, ‘Tama na, sobra na! (Enough is enough!).'”

Reflecting on the recent elections, my parents fear that the administration of the new president will resemble that of his father. They mourn the fight they fought in their youth, fearing that their children will suffer the same trauma. Their stories, while not as harrowing as other accounts of torture, killings and other human rights abuses during the dictatorship, reflect a dark moment of fear and uncertainty in the history of our country.

As I write this article and talk to my parents, I find myself with more questions and fears than answers and hope. I wish I had more of the latter. There is sorrow that envelopes my heart at the continued disappearance of fairness and democracy in the Philippines. I feel guilty for not having done enough to keep the memories of my parents’ youth alive. I regret that my actions failed to save our country. We have failed our parents’ generation.

“I feel guilty for not having done enough to keep the memories of my parents’ youth alive. I regret that my actions failed to save our country. We have failed our parents’ generation.

I regret that the waters of this election have been muddied by attempts to revise our history through counter-narratives circulated on social media. I fear that while there are educated young people who know our true story and spread it, there are many who lack the resources to deflect the brainwashing that afflicts us. Access to knowledge is the perpetual inequality of our nation.

Unfortunately, I am part of the brain drain. I am one of the many Filipinos who fled our country in search of a better future elsewhere. Mine is a guilt and a burden, I’m sure, shared by many Filipinos working overseas, living vicariously our nation’s history through our screens. Every day we disguise our angst in polite smiles, the calamities of our country reduced to mere chatter as we approach the jobs we have fought so hard to acquire abroad. We mourn in silence, while many also celebrate a victory. Part of me almost envies their sense of joy.

Election season in the Philippines, like in many other democratic states, provides people with an opportunity to dream of a hopeful future. We rely on the leaders who are vying for our votes to save us from drowning in the quicksand of where we are today. And yet, in the four presidential elections I have witnessed in my lifetime, I feel we continue to fall into the perpetual cycle of hope giving way to disappointment and frustration as each new administration does not keep its promises. I wonder if I’ll live to see this cycle end.

I find it hard to be optimistic in these times. Especially as I watch many other nations crumble under the elite’s thirst for power. However, while letting my grief run its course and letting my tears flow, I know that the struggle for democracy does not end with the counting of the last ballot. It continues to be exercised through discussion and education of our compatriots, outlining action steps to preserve our right to truth and freedom of expression. There is so much more we can continue to do. We can organize, educate and keep telling stories.

“As I let my grief run its course and my tears dry, I know the fight for democracy does not end with the counting of the last ballot.”

I am skeptical about this next administration. But for the love of my country, I really want to be proven wrong about my fears and my parents right about their hopes: this story will not repeat itself.

It’s the least my people deserve.

How to get the most out of ridesharing services