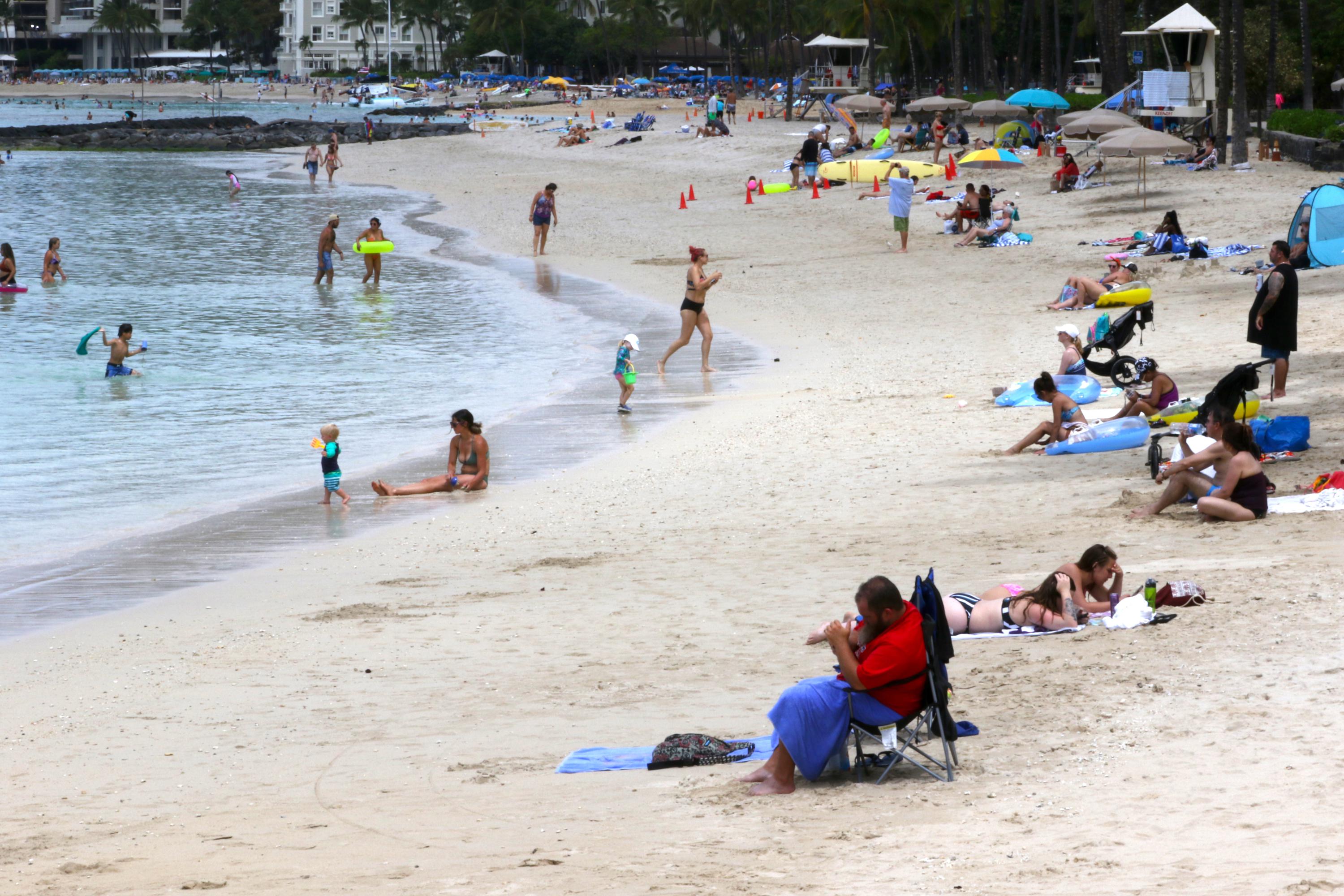 HONOLULU (AP) – Authorities in Hawaii are under pressure to increase COVID-19 testing for travelers as the islands face a record spate of new infections, hospitalizations and deaths. The calls come as federal guidelines change to require negative viral tests of vaccinated and unvaccinated people coming to the United States

Despite evidence that more COVID-19 testing would help reduce the spread of the disease, especially in a remote destination like Hawaii, heads of state have resisted the implementation of a two-test policy for travelers arriving.

Earlier this summer, the state removed all testing requirements for those vaccinated.

And even with just one pre-flight test for unvaccinated travelers, experts say infected passengers can easily fall through the cracks.

Due to the incubation and latency periods of COVID-19, using a single test to prevent the spread among tens of thousands of daily visitors is akin to using a chain link fence to keep mosquitoes out, said Dr Darragh O’Carroll, an emergency and disaster physician in Honolulu.

“There are a lot of holes,” O’Carroll said. “The science has been pretty conclusive since probably June 2020 that a single testing system was no more than 30-40% effective at catching a population of infected people.”

O’Carroll and several of his colleagues urged heads of state to do the same, he said.

“No one seemed to really listen,” he said. “It doesn’t matter what we said or how conclusive the science looked.”

After months of mandatory quarantines, business closures, and virtually no tourists, Hawaii had one of the lowest infection rates in the country. Then, in October 2020, the state allowed travelers to skip quarantine with a single pre-flight test.

Infection rates have increased, but they have remained low compared to other states. Part of this has been attributed to a severely crippled tourism industry and a lack of participation in leisure travel. And some believe visitors don’t see the incentive to test after arriving when faced with a quarantine away from home.

But as the number of trips increased this summer, so did infection rates.

In July, Hawaii lifted its quarantine and testing requirements for vaccinated travelers. A month later, the state was plagued by a record spate of delta variant cases that were filling hospitals and killing more people than at any time during the pandemic.

Prior to July, Hawaii reported a seven-day average of 46 daily cases. In the first week of September, that number reached nearly 900. Case rates have slowly started to decline since then, but experts say it’s unclear whether that will hold up.

Much of it was community spread fueled by the delta variant, which was introduced by travel.

A to study published in March in the medical journal The Lancet Infectious Diseases showed that the risk to an overall population is reduced by only 36% with a single pre-flight test. But a two-test system coupled with a short quarantine period catches a much higher rate, exceeding 70% of infected travelers, according to the study.

Lee Altenberg, assistant full professor in the Department of Mathematics at the University of Hawaii, wrote that the article “is one of the very few studies available to inform policymakers in Hawaii.”

“The public had a bad impression of the protection we got from the Safe Travels pretest program, and you can’t make good policies if you don’t have accurate information,” Altenberg said.

“We have to be absolutely serious about our travel protocols,” Altenberg added. “And if we have the mistaken impression that (Safe Travels) prevents 90% of infections, we are not going to take these protocols seriously.”

The study authors said the 88% figure represents the percentage of contagious people that would be detected on the day of travel, not the overall reduction in risk for a destination population.

The difference between “infected” and “infectious” is significant, said one of the study’s co-authors.

“There are obviously people who… will develop an infection but are not yet contagious,” said Dr. Nathan Lo, an infectious disease researcher at the University of California, San Francisco. “And these people will not necessarily be detected. “

Governor David Ige did not respond to a request for an interview, but the state announced Monday that a million free rapid tests are being provided for routine testing of Oahu residents.

Lt. Gov. Josh Green told The Associated Press that testing decisions ultimately rest with the governor, but noted that Hawaii’s single testing policy is superior to other states within the states. United have done, helping to keep the islands safe.

“If the mayors want to do additional testing, I absolutely support that,” Green said. “Offering voluntary take-on-arrival antigen testing for vaccinated and unvaccinated travelers could offer additional protection given the highly infectious nature of the delta variant. “

Green said only Alaska has a similar system in place among U.S. states. Alaska is also facing a record spate of new infections and hospitalizations.

Dr Mathew Kiang, epidemiologist and professor at Stanford University, was the lead author of the Lancet study. He is concerned about the lack of routine travel tests as well as the so-called breakthrough infections for those who are vaccinated. Experts say the injections help reduce the severity of the disease, but those infected could pass it on to others.

“There are a lot of things we’re still not entirely sure about… breakthrough infections, especially in terms of asymptomatic spread,” Kiang said. But “we know that the delta is one of the many variations of concern and this will continue to evolve over time.”

Kiang said that additional testing “allows you to attract more visitors and boost the economy.”

how boat trips give games a narrative respite • Eurogamer.net