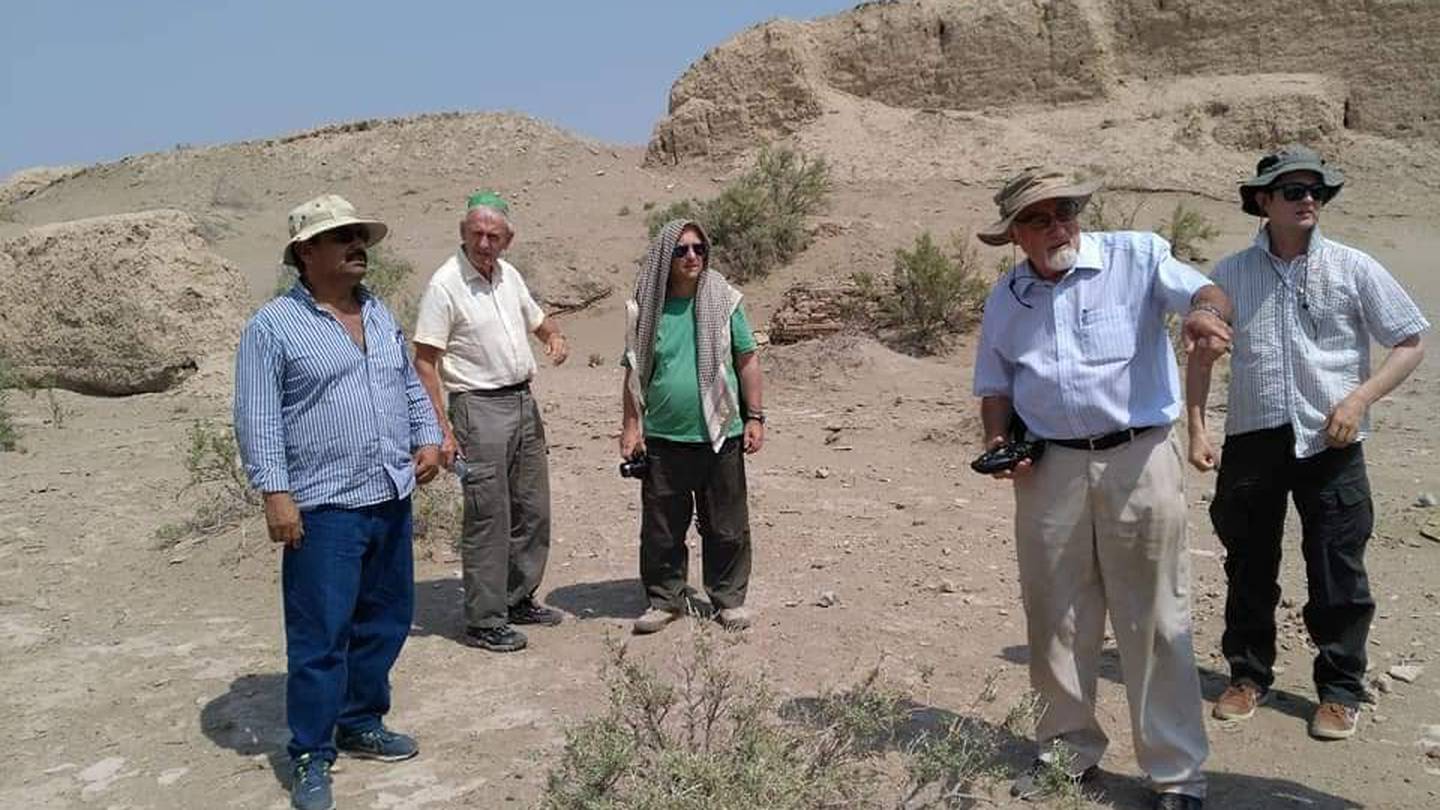 For a man called the world’s most extreme tour guide, Geoff Hann had treated war, sanctions, terrorism and a global pandemic as minor obstacles in a mission to share his passion for the ancient history of modern Iraq. .

He took a party to the country during the 1980-1988 Iran-Iraq War and was one of the first to take tourists to see the destruction wrought by ISIS in Mosul.

The Briton was there after Western governments imposed sanctions on Saddam Hussein’s regime and when Covid-19 travel bans were finally lifted.

But at the age of 85, one last tour of the nation’s riches proved one trip too many for Mr Hann, who died last month in a Baghdad hospital after failing to recover from a stroke cerebral.

The country’s champion of ancient culture died in police custody, and with two members of his party facing charges of smuggling historical artifacts. It was the desperate end to a lifetime of remarkable adventures.

The two European tourists are due back in court next month after they were arrested for collecting fragments of broken pottery from the historic site of Eridu in southeastern Iraq as souvenirs.

Briton Jim Fitton, 66, and German Volker Waldmann were detained after border officials found the shrapnel in their luggage as they prepared to leave the country on March 20.

Other members of the group had already left, but the couple offered to stay to care for the now injured Mr Hann, who was taken to hospital after being deemed too unfit to fly, the family said of Mr. Fitton.

Colleagues and Mr Hann’s family declined to comment on the circumstances of the case due to the ongoing legal action, but said he would have been horrified to learn that a few of his defendants were suspected of smuggling.

They said his life was dedicated to preventing the looting of historic sites.

Although he had traveled to some of the hotspots of the world, Mr. Hann felt a strong sense of responsibility to his clients.

“He was very protective and caring of the people he took,” said Karen Dabrowska, his former collaborator for respected guides to Iraq.

“He was taking people to places like Iraq and Afghanistan unlike [UK] Advice from the Ministry of Foreign Affairs. I don’t think the Foreign Office liked him, but he never put people in danger.

“He had very good people on the ground who could talk to him about the dangers and they never really had any incidents in Iraq.”

Mr Hann’s protective powers were put to the test during a trip he led to Afghanistan in 2016.

The group was fired upon by the Taliban and their tour bus was set on fire, injuring him and five holidaymakers.

Although he said shimmer that tour members could “dine on this story for years,” Mr. Hann was gravely affected by the incident, his family says.

“It really bothered him,” said his daughter, Louise Woffenden. “He came back and he obviously had physical injuries as well. It was very difficult.”

He had wanted to go to Afghanistan to see how things had changed after the war started following the September 11, 2001 attacks on the United States.

“He was devastated when some of the factions in Afghanistan dismantled the Buddhas [of Bamiyan]”, said his daughter. “He was in tears.”

Due to the nature of his travels, Mr. Hann was always aware of the personal dangers he faced.

“I always spoke to him before every trip,” Ms Woffenden said. “We always said we loved each other. Our goodbyes have already been said.”

His passion for Iraq and for travel was undeniable. He started his travel agency in the 1970s, inspired by a trip he took in a motorhome to India with his two daughters.

His company, Hann Overland, organized trips to Kathmandu, but later specialized in the Middle East and countries with rich histories hard hit by modern conflict.

Mr. Hann was a pioneer in organizing trips to hard-to-reach places independently, said James Willcox, the founder of Untamed Borders, a company organizing similar trips in the region.

“If people wanted to go to Iraq and see things, he was the man to do it for a long time,” he said.

Mr. Hann was a meticulous researcher and recognized expert on Iraq.

Before the 2003 invasion, the US Pentagon ordered copies of its guide to Iraq to try to avoid destroying 6,000-year-old treasures from the cradle of civilization, Ms Dabrowska said.

“I don’t think he felt a thrill in the face of danger,” she said. “He wanted to take people to places like Iraq and Afghanistan and gave two fingers to Saddam and two fingers to the Taliban.

“He would say those stories are more than them. ‘The Tigris and the Euphrates were there before we came and will be there after we left,’ he said.”

An Iraqi guide who worked with Mr Hann for 20 years said he explained his subject with enthusiasm and verve.

“Geoff was my favorite teacher, you never got bored with him,” Raad Al Qassimi said.

“Geoff is an Iraqi icon. Everywhere he had friends. He loved Iraq and the Iraqis loved him. Unfortunately, we lost it.

Dr Mehiyar Kathem, author of a grim report on the state of conservation efforts in Iraq, said Mr Hann was well known in Iraq for bringing tour groups with his company Hinterland Travel, however difficult circumstances.

“He was an amazing guy,” Dr. Kathem said. “He was 85 years old and he continued to be active and to organize these tours.”

He said the recent case involving the two Europeans highlighted the need for Iraq to better protect its rich cultural heritage and educate visitors about what they can and cannot touch.

“Many sites are unprotected and not really open to tourists,” Dr Kathem said. “If you go to places like Babylon, you can find broken cuneiform fragments at all the sites.