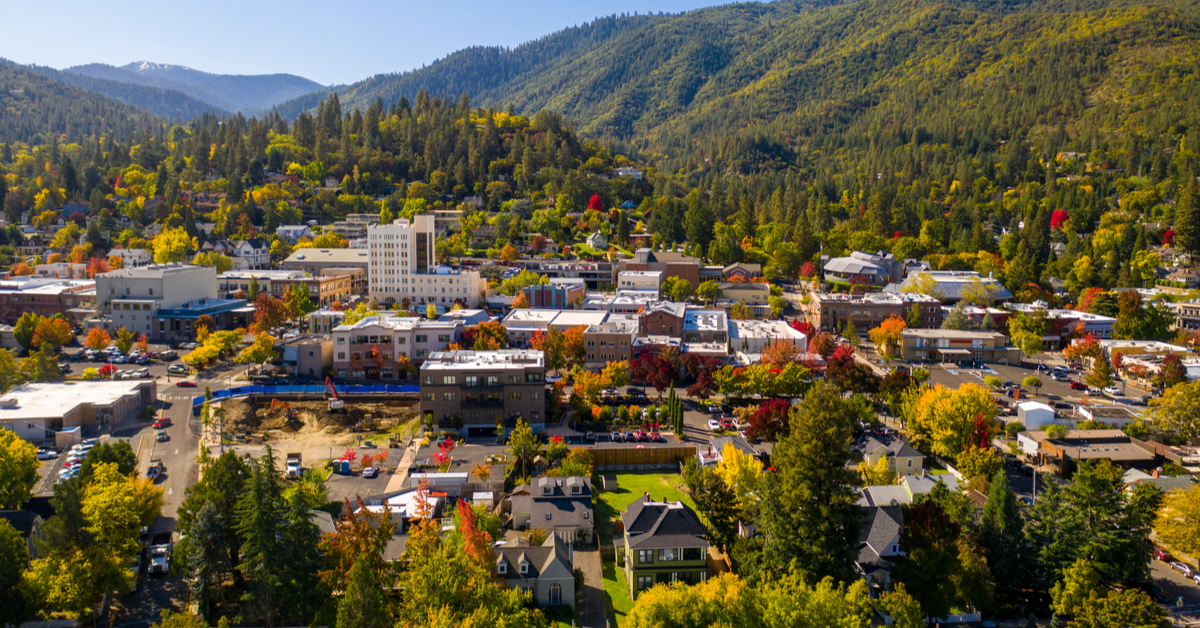 Fantastic things to do in beautiful Ashland

Ashland is known for the Oregon Shakespeare Festival, but there are other hidden gems to discover in this charming city. Ashland is nestled in a valley between the Cascade and Siskiyou mountain ranges in southeastern Oregon, just 15 miles from the California border.

The nearest major airport, Rogue Valley International (MFR), is located in Medford, just 15 miles away. Or, one can enjoy the highway from Portland or from San Francisco. Ashland is located halfway between these two towns.

I was hosted for two days by Travel Ashland. All thoughts and reflections are mine.

Things to do in Ashland

Ashland hosts the famous Oregon Shakespeare Festival, one of the oldest and largest repertory theaters in the United States. The season runs from mid-February to early November with productions in three theaters: Angus Bowmer Theater, Allen Elizabethan Theater and Thomas Theater. You can enjoy the Green Show during the summer evening performances, a half-hour production in the courtyard with guest performers. Behind-the-scenes tours, as well as educational discussions, are available. Also, be sure to stop by the Visitor Center, where you can ask questions, try on costumes, and learn about OSF history. Also visit the Tudor Gift Shop for unique gifts.

Called Ashland’s crown jewel, Lithia Park is a 100-acre site just outside of downtown. In 2014, it was honored by the American Planning Association as one of the ten best American great outdoors. There is something for everyone, with trails, benches, picnic areas, bodies of water, gardens, tennis, pickleball and volleyball courts. From May to September, you can enjoy a morning walk guided by a trained volunteer naturalist.

Spend a morning admiring the collection of public art, including sculptures, mosaics, murals, and fountains. Click this link for a downloadable map. Three of my favorites are We are here, the bronze replica of the sculpture honoring the indigenous peoples of southern Oregon. The original is now in the library at the University of Southern Oregon. I also enjoyed the mural and the story of Las Calles de Guanajuato, commemorating the 50th anniversary of the twinning relationship between Lithia and Guanajuato, Mexico. Also search Street scene, the 14-foot-tall bronze sculpture by Marion L. Young. It features 12 people and three Shakespeare characters. Local townspeople served as role models.

Learn about Ashland’s history on a walking tour with a local expert, such as Peter, from Walk Ashland. I give it a warm recommendation! Guided tours last one to two hours with a group of no more than 12 people. The first tour offered is called Plaza & Founding of Ashland. Personalized tours can also be arranged.

If a self-guided tour is more your cup of tea, check it out Story cards, an online resource with information and maps.

Sip water at the Lithia fountains

The waters of Lithia are believed to have healing powers. The first Amerindians used the waters for their sick and the elderly. At one time, around the turn of the 20th century, it was hoped that the Ashland region could become the center of a healing spa similar to those in some European countries. The costs of piping water became prohibitive, and with World War II that interest was lost. Stop by the Lithia Fountains in Downtown Plaza to sip some of these acclaimed healing waters.

Located on the campus of Southern Oregon University, the Schneider Museum of Art’s mission is to “make exhibitions and events accessible to all.” As such, there is no admission fee!

There are a variety of tours available for people of all ages and skill levels. To request a visit, complete a visit request form. You can also attend a walk-in tour every Tuesday at 12:30 pm No registration is required for the free tours on Tuesday.

Explore how science works in an interactive museum

Spend an afternoon at ScienceWorks, where guests of all ages explore science through interactive experiences. There is also an excellent online program where one can check out the contributions of notables such as Dr Jane Goodall, Dr Lonnie Johnson and NASA mathematician Katherine Johnson, whose careers were portrayed in the film. Hidden numbers.

Admire the architecture and historic buildings

The entire downtown Ashland is listed on the National Register of Historic Places.

Admire the architecture of the IOFF Building, also known as the Oddfellows Building. The building dates from 1879.

If you walk around the city center on the weekends from March 15 to October 31, look for the Lithia Artisans Market, an outdoor arts and crafts market. You can meet local artists and artisans selling their products from over 40 kiosks located along the creek.

Enjoy a performance at the Oregon Cabaret Theater

Enjoy live theater, cabaret style and gourmet dining at the Oregon Cabaret Theater. Now in its 30th year, the season runs from February to December. Ordering food or drinks is optional. Desserts are only served during intermission. Be sure to try Dick Hay Pie, a mouthwatering combination of ice cream, peanut butter topping, chocolate, and pie crust. Delicious!

For more information on upcoming productions, click on this link.

Sip finely crafted beers at one of Ashland’s craft breweries. Caldera Brewing Company offers unique beers like Toasted Coconut Chocolate Porter and Mother Pucker Raspberry Sour Ale. Enjoy the beautiful mountain scenery and grab a bite to eat at the restaurant. Discover the 4,600 items in the beer and cans collection.

Standing Stone Brewing Company offers seasonal and year-round beers as well as an extensive pub menu and corporate store with unique gifts. The company’s commitment to sustainability and the smart use of resources has resulted in it being named one of Oregon’s Top 100 Green Companies.

Film buffs will be delighted with the nationally accredited Ashland Independent Film Festival. AIFF’s main event takes place each April when filmmakers from around the world come together to view documentaries, feature films and short films. There are also forums and screenings as well as year-round activities celebrating independent films. You can subscribe to the newsletter to keep up to date with the latest events.

With 50 miles of trails and 18 parks, there is a trail for all skill levels, pedestrian or cyclist. Click on this link to access the Ashland Trails Association maps.

Visit Irvine & Roberts Wineries to taste finely crafted wines in beautiful surroundings. Located just 5 miles from downtown Ashland, the site features a tasting bar, fireplace, floor-to-ceiling windows and a large patio. Take the time to appreciate their story and how they ‘learned to listen very quickly. [their] plants. ”A talented chef prepares small bites to accompany the wines.

The Peerless Restaurant & Bar, located in the Historic Railroad District, is recognized as one of Southern Oregon’s premier dining destinations. Dine in the pretty courtyard surrounded by fountains and shrubs, named one of the best places for al fresco dining in Ashland.

Also watch out for annual culinary events, including the Ashland Culinary Festival and the Oregon Chocolate Festival.

From boutique hotels to historic inns, Ashland offers a variety of comfortable accommodations.

We enjoyed a beautiful suite at the Plaza Inn & Suites. The location is ideal, a short walk from Lithia Park, the theater district and many restaurants. The spacious and welcoming lobby is furnished in a Shakespearean theme.

The historic Ashland Springs Hotel is a downtown landmark dating back to 1925. The beautifully renovated interior was featured in Architectural summary. Take the time to study the different collections in the lobby.

With all that Ashland has to offer visitors, one weekend is likely to lead to more! Schedule a visit soon.

Why you should have a plan B aligned