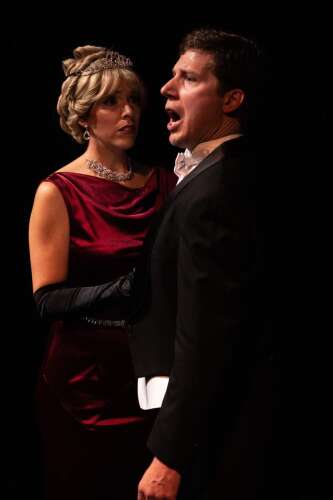 After thinking about all the different ways a person can die, check out â€œA Gentleman’s Guide to Love & Murderâ€ at the Pennsylvania Playhouse, Bethlehem, for some more tips and have a good time.

And for a master class in dealing with a gorgeous blonde and a beautiful brunette at the same time, you couldn’t do better than watching multi-talented Patrick Mertz (Monty Navarro) double down on his charms.

He expresses his aspirations for social mobility in song: “You only have one right to an old noble name …” from “Foolish to Think” as he makes his murderous path from lower class clerk to lord of the Chateau.

Mertz presents his musical chops in an ode to his true love in “Sibella”: “And there’s that smile with a secret inside, And here are two eyes that shine, With a playful light …”

Rody Gilkeson, chairman of the board of Pennsylvania Playhouse, leads a tour de force that brings together stunning vocals, gorgeous costumes, dramatic lighting, and terrific onstage cast in a murderous and mysterious musical.

The musical, featuring a book and lyrics by Robert L Freedman and music and lyrics by Steven Lutvak and based on a novel by Roy Horniman, continues weekends through October 24 at the Pennsylvania Playhouse.

Christopher D’Imperio (The D’Ysquith Family, in multiple roles) is superlative as he goes from the haughty haughty English gentleman (Lord Adalbert D’Ysquith), singing “Where’s the Dignity?” from “I don’t understand the poor” to the portrait of a gay gentleman farmer and pub boss (Henry D’Ysquith) who, with Monty Navarro, makes duets in “Better With a Man”.

D’Imperio as Major Lord Bartholomew D’Ysquith wearing a fantastic costume is a highlight of Boffo’s performance from D’Imperio. But for the laughs and the great acting capacity, it is his interpretation of Lady Hyacinth D’Ysquith that propels him to the fore in this production.

Kimberly Mertz (Sibella Hallward) is bright and beautiful as she and Patrick Mertz make bright, romantic and twinkling sparks in multiple scenes.

Whether in breathtaking haute couture or a modest undress, Mertz is a formidable singer (“I don’t know what I would do without you”, “The Last You Would Expect” and “Poor Monty”).

Elizabeth Marsh-Gilkeson (Phoebe D’Ysquith) in beautiful third angle of a Sibella-Monty-Phoebe love triangle, is lovely, especially in “Inside Out” with Patrick Mertz (Monty) and Kimberly Mertz (Sibella) in “That Horrible Wife.”

Deb Jacoby (Tour Guide) embodies the sergeant major qualities all tour guides need while guiding rubes through the cultural relics handed down by their wealthy and powerful punters.

Geri Kery (Miss Shingle) is very entertaining as a mysterious woman who sets Monty Navarro on his quest leading from poor to prince (or, at least, lord).

Sophia Johnson-Grimes (Lady Eugenia D’Ysquith) looks stunning as she hosts a dinner at Lord Adalbert’s Highhurst Castle and as part of the talented Ensemble.

The ensemble (Evan Heger, Cindy Cicconi-Ernst, Andrew Maldonado, Matt Redline, Janelle Taylor and Deven Windisch) is a musically talented group of actors, particularly evident in a scene of “dance like an Egyptian” and a cemetery scene.

This piece is a first-class production and a special mention must go to costume designer Todd Burkel and assistant costume designer Elizabeth Marsh-Gilkeson, who have their hands full just to count the characters. Their costumes are distinguished by their quality, their fidelity to the styles of the early 20th century, from the ordinary class to the well-heeled, and in the case of Sibella Hallward’s dresses, simply stunning.

The artistry of Music Director Nancy Shumaker, choreography by Megan Kohler Viscomi, and set and lighting design by Brett Oliveira combine to make this production of “A Gentleman’s Guide to Love & Murder” a piece worth seeing. .