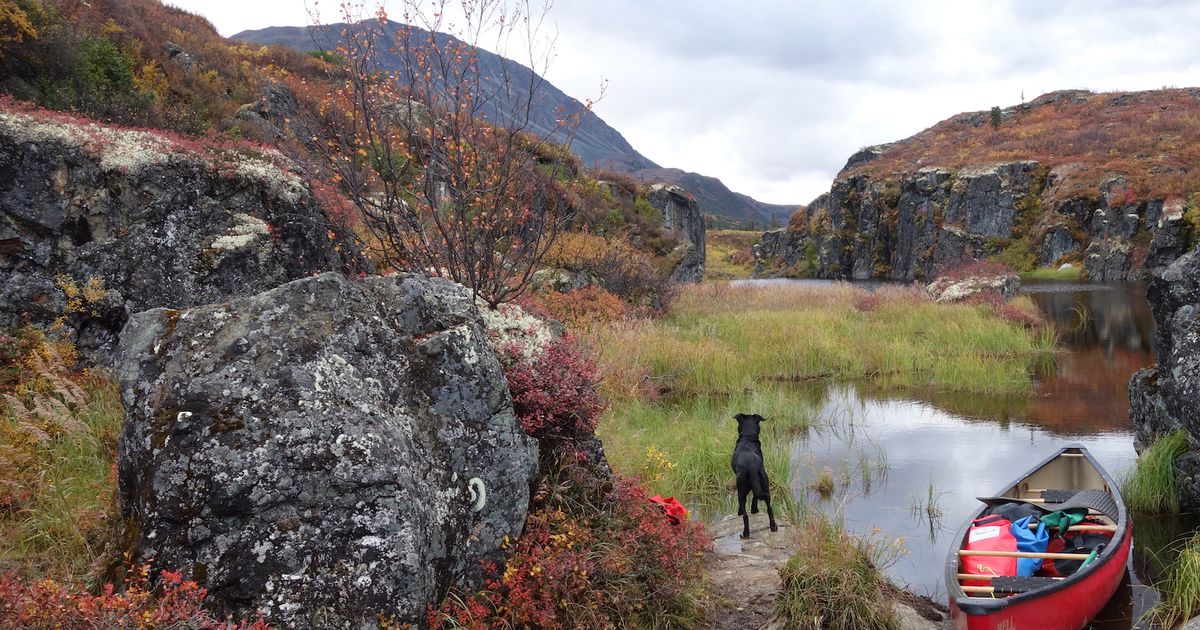 Our Labor Day canoe trip was a day and almost a short boat.

With our daughter traveling with teammates for a high school cross country competition, my wife, Kristen, and I spent a long weekend together. We chose to paddle our canoe on the Wild and Scenic River portion of the Delta River, which neither of us had floated.

In central continental Alaska, with our two dogs on board, we dipped our paddles into the calm of Round Tangle Lake, surrounded by orange and red tundra. We were in the Tangle Lakes Archaeological District, where professionals found hundreds of ancient house pits concentrated in this area about 10 times the size of Fairbanks.

We camped overnight under Sugarloaf Mountain, where the skinny Lower Tangle Lake bends the weeds north to become the Delta River.

The river there shows a quirk, shared further west by the Nenana River: it begins its life on the south side of the Alaska Range and crosses the mountains on the north side. Either way, the two waterways followed a corridor through which people (and later cars and trucks) have moved for thousands of years.

As we drove through hills decorated in neon fall colors, we stopped to haul our boat on a short portage path around a waterfall. The other side of the hundred meter boat carrier is where our unintended adventure began.

Our first clue to the character of the upper Delta was a cigar-shaped obstacle in the water just after the portage. I watched for a few minutes before realizing it was an aluminum canoe pinned to a rock below the surface of the water.

We repacked our boat and climbed a rock to get a better view of the river below the submerged canoe. I felt the tingles of the roar of the water in which you are going to slide your boat.

Kristen and I chose a dark water line that allowed us to avoid the sunk canoe and pull downstream. I was in the back (the stern), doing most of the steering.

Our boat is a red Bell dinghy made from a material called Royalex. The canoe business no longer exists and no one today makes the foam core sandwiched between plastic sheets that make up the canoe’s hull. An engineer from Uniroyal Tire Company invented Royalex, which canoe makers discovered they could heat and stretch on a canoe-shaped mold.

The bell carried us the 550 miles of the Tanana River and endured being dragged over rocks as it was filled with bags of moose. Its front seat was a nice place for our 4 year old to take a nap on her first trip down the Yukon River. That’s why I felt so bad about what happened next.

We jumped into the water and I walked in the back, sitting up with my paddle in my hand.

We drove past the submerged canoe, loving the feeling of rushing through this colorful and fragrant country. We pulled back to a whirlpool to watch the river below.

We saw a route between the rocks and agreed to stay in a black waterway with no white on top.

As we cruised along an outside bend of the river free of toothed rocks, it reminded me of the Chatanika River north of Fairbanks, a much milder stream. Thought we were in the worst of the mile long rock gardens that friends and guides warned us about.

After sweeping this turn in the fast water we saw some rocks on our way. Soon the boat rocked on a rock, like an alligator basking in the sun.

At idle, the boat swiveled sideways in relation to the current. I vaguely remembered my friend Larry Fogelson’s non-intuitive advice: lean towards the rock, to prevent living water from entering the canoe.

This memory came too late; we leaned back. Water spilled over the edge of the boat. The canoe has become a bathtub.

Pepe, our Chihuahua mix, was the first to abandon ship. We don’t know if he jumped or was shaken, but we did see his little black head moving away downstream.

Kristen and I could both stand on the rock that pinned the canoe, with water rushing past us. The boat looked more like a boomerang every second as the current pushed it around the rock.

Cora, our Lab / blue heeler, was perched on the only dry bag that was not floating on a tether rope. I lifted her from the bag and put her in the water to swim to shore. She paddled furiously through the white foam, shaking herself on a dry muskeg seconds later.

I looked at the canoe then bent with deep creases in its plastic / foam hull. How much more push could this take?

It was a bad situation, but we felt a little better when Pepe showed up in the brush 15 feet from us on the shore.

“I don’t know what to do next! I shouted over the roar at Kristen, who was standing next to me on the rock, water rushing around her waist.

“Throwing rope,” she yelled back, reminding me of the 50ft nylon rope attached to her own storage bag. “I’m going to use it to get ashore and then remove our gear from the boat.”

Compressing a lot of stressful time in a sentence, that’s what we did. With Kristen on the shore throwing the bag of rope at me over and over again, we recovered everything except a paddle, our small shovel, and a foam mat the dogs were sitting on. All of these things have escaped downstream.

I was then alone on the rock, just downstream from the pinned canoe. Water rushed over my bottom half, destroying my pocket camera (but not my satellite texter, which proved waterproof in the other front pocket).

As I tied all of our things to the rope for Kristen to pull to shore, I glanced at the white interior skin of the folded boat. It was wrinkled like my grimacing face, but I didn’t see any holes.

I suddenly remembered something that Ev Wenrick, who had sold us the boat 20 years earlier, had said.

“This Royalex can bounce if you slam it on a rock.”

Before grabbing the throwing rope to let it swing back to shore, I tied the far end of the rope to a bench – a narrow board that is the width of the canoe just in front of the back paddler’s feet. .

I then crossed the rock towards the middle of the river. With both hands I pulled the end of the boat for leverage.

The canoe moved a few inches and then freed itself, like a soggy log. I climbed on it, grabbed the upstream end of the rope, and held on for a Tarzan ride to shore in my life jacket, not bouncing off as many rocks as Kristen had. .

I got out dripping onto the steep bank.

The water-filled canoe followed, swaying downstream. The rope, which Kristen had tied to a broom willow, tightened and held the shaking of the boat, heavy as a walrus.

After putting on some dry clothes, we took the canoe out and placed it upside down on a large rock. The boat was crushed, but it was no longer bowed like a banana.

After a night under a tarp trying not to slide down the steep slope with the dogs, we woke up to the rain in the morning. We looked at the canoe. To our amazement, it had re-inflated in its torpedo car.

Despite a few scars on her pretty face, the shell was stiff. There were no holes. Running my hands over the scars I was confident the boat would do as it always has.

Kristen wasn’t so sure. But with tens of kilometers of bush to get to the nearest road, the bell was our ticket out.

The next day, after dragging the canoe and all our gear through the brush above the boulder that was pinning us down, we were nervous as we packed the boat into a little whirlwind.

Pointing upstream, we breathlessly carried the canoe across the river to the softer side. Then I used the tow rope to line the canoe another half a mile downstream, walking through the water in my rubber boots while guiding the boat like a dog on a leash. Kristen and the dogs walked through the brush next to me.

When the river widened and there were fewer rocks, we all got into the canoe in a patch of calm water.

For the remainder of the 20-mile river, the canoe performed as it always has, responding to the turn of a paddle and crossing the river with precision when set at the proper angle. The hunters who watched us float had no idea what this boat had been through, unless they perhaps noticed the wrinkles on its cheeks.

Days later, Kristen and I are still wired from the experience, humbled by the river, and grateful for the smart people who once molded strong, tough things out of plastic and foam.

Beijing tops list of travel destinations for next vacation