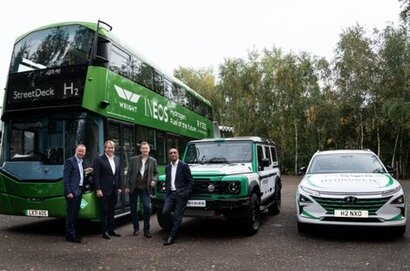 The UK Hydrogen Roadshow, a partnership between bus manufacturer Wrightbus, hydrogen distribution company Ryze Hydrogen and hydrogen production company INEOS through its subsidiary INOVYN, will see the first double-decker bus in hydrogen fuel cell, the Wrightbus Hydroliner, travels a 600 mile route as it makes its way from London to Glasgow for the United Nations climate conference, COP26.

He will stop at various companies along the way to highlight the potential that low carbon hydrogen has to play in various industries.

INEOS’s subsidiary, INOVYN, is the largest existing operator of electrolysis in Europe, the critical technology that uses renewable energy to produce hydrogen for power generation, transport and industrial use. The company is Britain’s largest producer of low-carbon hydrogen, safely produced alongside the production of chlorine and caustic soda at Runcorn for over 100 years and currently produces enough each year to power more than 1,000 bus. INOVYN operates gas storage and has extensive expertise in hydrogen management combined with its established know-how in electrolysis technology, which places it in a unique position to supply fuel to the emerging new economy. hydrogen.

Wrightbus, based in Ballymena, Northern Ireland, produces hydrogen FCEV buses. They developed the world’s first double-decker hydrogen bus which is equipped with a hydrogen fuel cell powertrain and its battery can store up to 48 kWh, allowing the bus to travel up to 280 miles, by emitting water rather than carbon dioxide as it goes.

The roadshow will also mark the announcement of an important partnership between Wrightbus and INEOS, as companies work together to create hydrogen solutions that will help decarbonize the transport industry and help the UK meet its goals. Net Zero.

“Hydrogen technology has the potential to create and maintain hundreds of thousands of high quality jobs in all parts of the UK, spanning many different industries,” said the executive chairman of Wrightbus and Ryze , Jo Bamford. “At Wrightbus, we really walk on foot. Not only have we pioneered zero emission transportation, but we have increased our workforce from 56 to over 900 in just two years and introduced four zero emission buses in 12 months. Our two-stage hydrogen is a world first, a tremendous honor for our plant in Northern Ireland, and we are delighted to partner with Ineos to undertake this massive tour of the UK as part of our journey to COP. Our itinerary will include stops with partners at the forefront of hydrogen technology, including aviation, heavy machinery and heating. We’ll also chat with companies working to create the important infrastructure needed to produce hydrogen at the levels we need to achieve our ambitions for a strong UK-wide hydrogen economy.

Ryze CEO Buta Atwal added that the tour will highlight the fantastic innovation that is happening across the country as we move towards a zero carbon future.

The collaboration between INEOS through its subsidiary INOVYN and Wrightbus offers both companies new opportunities to expand the use of low carbon hydrogen. INEOS via INOVYN is Europe’s largest electrolysis operator, which produces low-carbon hydrogen, and Wrightbus manufactures the world’s first double-decker hydrogen bus. By teaming up, the two companies believe they can advance the daily use of hydrogen in heavy-duty transport fleets across the UK.

PH emerges as the best beach in Asia, again diving destination for 2021