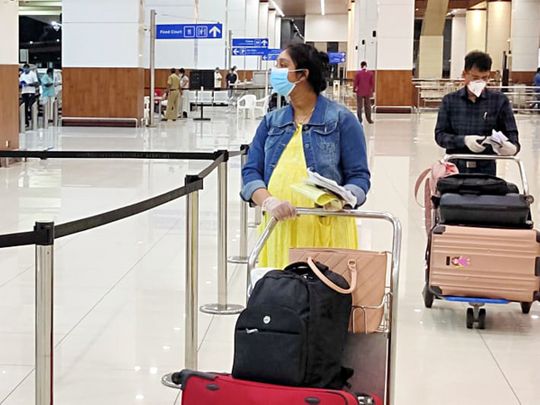 Dubai: Round-trip fares on some India-UAE flights are starting to drop as the former waives COVID-19 travel requirements.

According to travel industry sources, return fares on some routes are now around Dh1,200 on average, up from Dh2,500 just a week ago. “Pune airport is also open, which means people no longer have to travel all the way to Mumbai to board a flight from Dubai,” said a travel agent in Dubai. (Last month, Pune airport resumed international flights after a nearly two-year hiatus due to the pandemic. The first flight to take off to an international destination was Sharjah.)

Last week, India said passengers from more than 80 countries would be allowed to travel into the country with just a negative RT-PCR test report or a certificate showing completion of the primary vaccination schedule. The list includes travelers from the US, UK, Switzerland, Australia, Sweden, Spain and Sri Lanka, but does not currently include the United Arab Emirates.

“So far, we have not heard anything about this from the authorities,” said a spokesperson for Dubai Link Tours. “We usually get a flyer from Emirates airline advising us of any changes, but this time there has been nothing. Demand is high with lots of people traveling at the weekend – yet fares have come down a lot .

The prices go down

A ticket from New Delhi to Dubai can cost between 1,000 and 1,600 Dh, while from Mumbai a flight can cost more than 2,000 Dh. The Kochi-Dubai sector offers economical options with tickets under 700 Dh. Bengaluru also has tickets for Dh600-Dh800.

Industry sources say the exclusion of the UAE from the revised list of COVID-19 testing requirements is in line with India’s reciprocal policy. “India recognizes vaccine certificates from various countries on the basis of reciprocity,” an aviation consultant said. “The United Arab Emirates does not yet recognize India’s vaccine certificates.”

Passengers arriving in Dubai from India must have a valid negative COVID 19 PCR test certificate for testing within 48 hours. They must also have a rapid PCR test report for a test taken at the departure airport within six hours of departure.

India, which suspended normal commercial flights in 2020, has signed “bubble” agreements on a bilateral basis with countries. Although most major airlines now operate between the two countries, they face severe capacity constraints and longer delays in obtaining approvals. All of this has led to skyrocketing airfares.

The “India first” approach on certain routes ensures that Indian carriers do not face direct competition from carriers from the UAE or other countries. Despite these hurdles, airline seat capacity between the UAE and India has reached almost 90% of pre-COVID-19 levels, according to CAPA India. “Before India’s third wave, traffic between India and the UAE was around 70% of pre-Covid levels.”

Most Indian expats based in the UAE do not see the testing regime as a major obstacle to travel. Ansh Parteek, who works for a construction company based in the United Arab Emirates, will travel to Chandigarh in April to meet his family after almost a year. “It makes no difference; I would still have passed the test for my parents’ safety.

Not everyone shares the same point of view. Jeffrey George, who is awaiting the reopening of his college in Maharashtra, believes that lifting some requirements would certainly have made travel easier.

“The uncertainty surrounding the reopening of my college has been difficult – it will lead to higher travel costs for me,” said George. “I can get a refund on plane tickets, but the same can’t be done for a PCR test.”

Road repairs saved my trip across the country

If you could be anywhere in the world, where would you be?