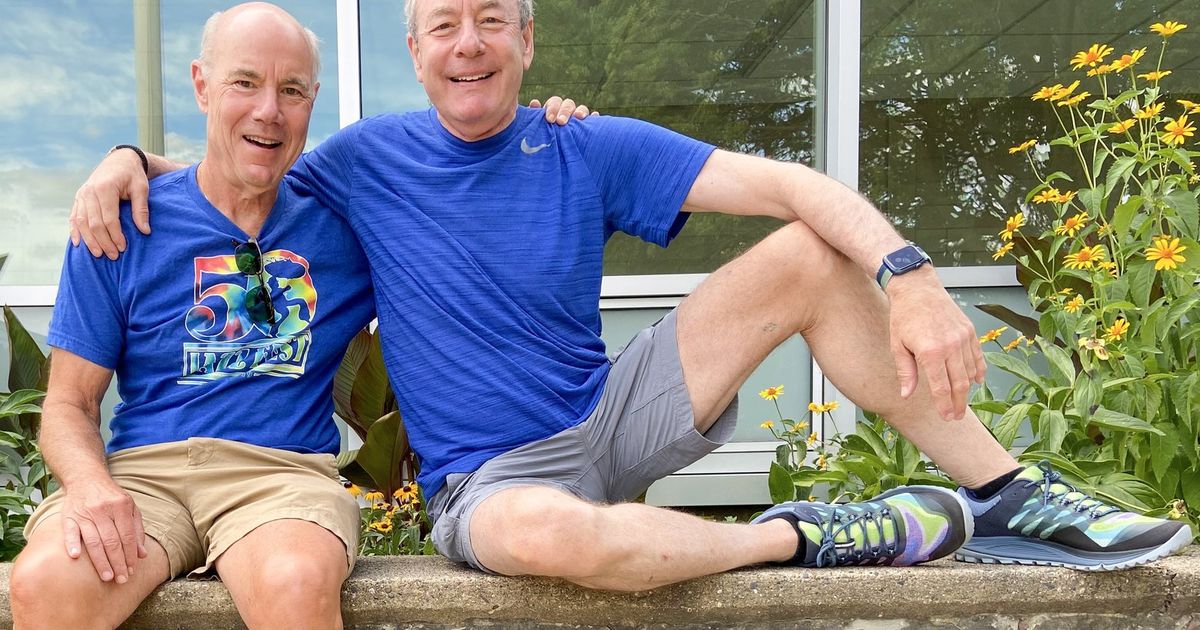 Inspired by a Simon & Garfunkel song, two old friends travel the world to sit together on a bench

It was their first day of seventh grade, and outgoing Edelstein turned to introduce himself to Bans during morning assembly at Highland Park Junior High in St. Paul.

“I know who you are,” Bans moaned, having made his inquiries.

Turns out they were trying to date the same girl.

Neither ended up with the girl, but Bans and Edelstein became best friends.

The kind who painted houses together in high school. The kind that lived together at the University of Minnesota. The kind who vacations together even though they live 2,600 km apart. And their mothers became dear friends, to boot.

To celebrate their lifelong friendship, Bans, a urologist in Scottsdale, Arizona, and Edelstein, a realtor in St. Paul, tried to live out their “great song” from high school – 1968’s Simon & Garfunkel’s “Old Friends.”

It all started 10 years ago when Edelstein underwent heart surgery. “I was blue and sentimental,” he recalls. “And I said, ‘Here we are 60, we have to start doing something. “”

So the old friends – whose birthdays are four days apart – took a trip together and, in a nod to Simon & Garfunkel, they were photographed sitting on a park bench. In this case, it was actually a natural bench – a piece of wood above the upper reaches of the Mississippi River in Itasca State Park.

They’ve “benched” every year since, except for one year of the pandemic and another when Edelstein injured his foot the day before the planned trip.

They’ve been to the Grand Canyon, the Blue Ridge Mountains, and the fjords of Norway, among other places, in search of the right bench.

“He likes more exotic trips,” Edelstein said of Bans. “And he really is a great hiker. Nature really speaks to him.

The friends document their tourist trips with lots of photos. Each voyage is commemorated in a hardcover book, which has 34 to 92 pages.

Their bench photos are not selfies. The ever-smiling buddies ask strangers to take pictures.

“We walked into this art gallery in Santa Fe and there was a bench that was Native American, and it took up the entire length of the studio,” Bans said. “We explained everything to the guy who owns the studio, and he takes the pan [photo]. This bench must have been between 15 and 18 feet and it was somewhat curved. I was there a year later. The bench has sold.

On their trip to Zion National Park, a guide helped them find an ideal photo op. “This kid takes us to this rock in the waters of the Narrows,” Bans recalled. “And he’s in the water literally taking our picture and he’s like, ‘This is so unique. I’ve never done a bench trip.

The benches vary as much as the locations – from a wagon wheel seat outside a restaurant in Jackson Hole, Wyo., to a natural resting place nicknamed Clam Rock in White Pocket, Utah.

Not every old friend’s journey is about finding the perfect place to park their behinds. They traveled to destinations on their bucket lists including New Zealand, Banff and Patagonia, with side trips to Buenos Aires, the Strait of Magellan and Cape Horn.

They also meet occasionally for concerts in the United States – Bruce Springsteen, Barbra Streisand, Chicago, Alabama and the Righteous Brothers, to name a few.

But the friends never went together to see Paul Simon and/or Art Garfunkel, coincidentally, two friends since primary school. Opportunities to see them perform have been limited since Simon retired from touring in 2018, and this summer Garfunkel canceled a European tour due to COVID concerns.

This month, Bans and Edelstein have a bench trip planned in New York. They want life to imitate the art of Simon & Garfunkel:

Can you imagine us years from today

How terribly strange to be 70

Both will turn 70 at the end of August. This time, for a change, they’ll be joined by Edelstein’s wife, Randy, and Bans’ partner, Debra Revzen, who produces the annual courtroom books. They have tickets to “MJ the Musical,” Michael Jackson’s Broadway show, and reservations at select restaurants. But they did not choose a very important bench.

“We’ll ask Paul Simon which bench and see what he thinks about it,” Bans said with sass and a prayer. “We want him to understand how influential his words have been for us for many, many years.”

And to see if maybe, just maybe, he’s going to take the picture of these two old friends on a park bench.

Student loans are on hold – should you still pay?