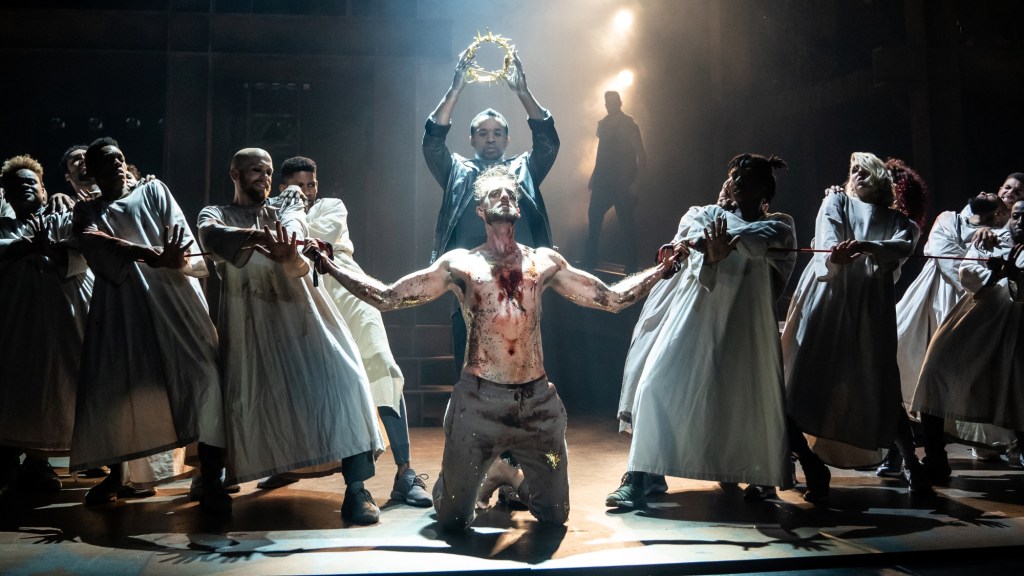 The lights went out to enthusiastic applause.

The sustained tuning of the opening rock guitar drew cheers.

And a cast of actors raced down the outer aisles of the theater and leapt onto the stage, heralding the welcome return of great musicals to our backyard.

On Tuesday night, a touring Broadway musical took to the stage at Segerstrom Hall for the first time in 608 days.

A tense and very energetic performance of “Jesus Christ Superstar”, here for a week, regenerated a cultural community hungry for large-scale experience.

This 50th anniversary touring production of the musical Andrew Lloyd Webber-Tim Rice is based on a popular 2016 revival created for an outdoor theater in Britain. It’s a welcome redesign, which emphasizes its rock roots and dispenses with reverent acting or grandiose regurgitation of the famous fanfare of the mega-bit song “Superstar”.

Reduced to a length without an intermission, it is a reminder that Lloyd Webber’s scores ultimately connect more than most of his fellow Broadway composers when it comes to their visceral melody. On Tuesday evening, a group of 11 musicians scattered on the second level of the artfully designed ensemble, certified that their music here acts like the 13th apostle and does not betray.

Because although Lloyd Webber has more than a few things to explain over the decades – drop the bombshell from Britain that stifled Broadway for most of the ’80s to’ 90s … and don’t get me started on ‘Starlight Express’ – this primordial work that he wrote at the age of 23 more than it holds today.

The basic plot – deemed blasphemous as entertainment at the time – uses the story’s ultimate traitor, Judas, as the centerpiece of the narrative of the last days of Jesus’ life in Jerusalem. (Decades later, “Hamilton” would call upon villainous Aaron Burr to guide us through the life story of hero Alexander Hamilton.)

As the primary events unfold, with indirect lighting and the swirling, well-choreographed chorus of up to 20 performers at a time, an effective hunch is obtained. We know nothing is going to end well here, but we are practicing nonetheless.

There are outrageous touches. Herod (an entertaining Paul Louis Lessard) is dressed as a camp caricature from “Rocky Horror” while performing the bouncy music hall arrangement of “Herod’s Song”. A crucifixion scene could be the first time that a staging discreetly employed an electric drill.

There are more than a few Broadway credits in the actor biographies, which is not common for a road show and this level of professionalism is visible across the stage.

Aaron LaVigne’s Jesus is the traditionally ambivalent messiah of most of the show (in every production I’ve ever seen, I’ve wondered how such a mocking dude had drawn so many followers) and wrestling with a foot awkward microphone was about as touching as LaVigne seemed to be. get up to sing the pivot “Gethsemane” and her character and performance emerged.

As Judas, James T. Justis was a hard-hitting, albeit nervous, tour guide through events. Justis’ singing satisfies, with its superior range when he briefly reuses the phrase “I don’t know how to like it”, impressive. Jenna Rubaii was a seductive, even plaintive presence in her acts as Mary. Alvin Crawford and Tyce Green also made an impact as evil high priests and engaging singers.

Turning from critic to marketer for a minute: The Segerstrom Center, like all local performing arts organizations, can particularly use sponsorship right now. Seeing this “Superstar” will be more than a cultural charity, but a very good theater too.

And if the timing isn’t right for this one, keep in mind that an unmissable roadside production of “My Fair Lady” is coming up on January 11.

Ready to leave town? 5 tips from experts who successfully traveled during the pandemic

GNB Voc-Tech Boys’ Football has hit a ticket for the Div. 3 Elite 8 with victory over Gloucester