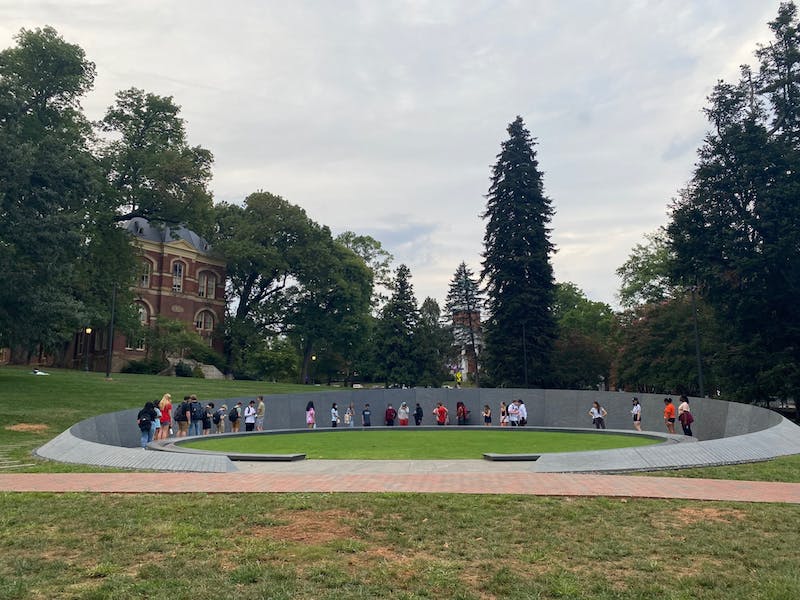 Mandatory historical tours teach the history of the slave laborers of the U.Va. – The Cavalier Daily

This year, Class 2025 members are expected to attend a historical tour and debriefing discussion focused on the history of slave workers at the university. The new program was created through a collaboration between the University Guide Service, Housing and Residence Life, Bringing Race into Dialogue with Group Engagement and History of Enslaved African American Laborers.

Nettie Webb, president of U-Guides community education and fourth-year engineering student, said the tours were meant to give freshmen the opportunity to learn more about the history of white supremacy and of the slavery of the University which was suppressed for many years.

“[The tours are] contextualize the history of slavery and white supremacy at this university, but also have students ask themselves what their position is on Grounds, like what this history and context means to you now as a student in this era still developing, ”said Webb. “So being able to add that context to the early years of college they attend and also show them the opportunity to destroy the legacy of white supremacy here through activism.”

Webb said HRL plans to impose the requirement that all early years attend the tours – all students will have one month to participate in the tour and if they don’t, then they will have a one-on-one conversation. -head with a resident advisor or a senior resident.

Visits began on September 11 and continue until October 17. Historical tours last under an hour and each group is limited to 30 students to ensure an engaging and intimate experience.

“The student engagement really surprised me,” said Webb. “While going through the AR group discussions, the students shared what they were learning and said that they really enjoyed being on the tour as it let them know where they were going to school. “

During normal historical tours, U-Guide members create their own tours and choose their own stops. To ensure all necessary information is presented to Class 2025 members, the Mandatory Tours were designed in collaboration between HEAAL and UGuides for the 15 guides who volunteered to lead the tours.

“Our tour guides also said these tours were some of their best experiences,” said Webb. “Being able to relay this story and see how it impacts the early years and how they think about this university was also very powerful and not something that the group of us who really thought about it was going to happen or was possible. at this moment. . “

Tours include information on the history of bonded laborers at the University, the creation of the Bonded Labor Memorial, and the position of students both on the ground and within the broader Charlottesville community. Stops include building on the lawn, the gardens that show the tales of bonded laborers, and the Thomas Jefferson statue on the north side of the rotunda to discuss the Unite the Right rally and the events of August 11 and 12.

“The tour touches the points and analyzes what slavery looked like and what this violence and resistance of slave workers was and also how this context leads to a structure and a landscape of segregation in U.Va. and achieve white supremacy, ”Webb said.

Kyndall Walker, a third-year student at Batten and one of the founding members of HEAAL, added that the tour was also approved and supported by Descents of Enslaved African American Labor Community at U.Va. The group – which was created in 2020 by the descendants of black slave and free individuals who built the university – aims to research, reclaim and honor the legacy of black slave and free communities and their descendants.

“We wanted to make sure [the descendants of enslaved laborers] were one, okay with what we were doing, and two, that they had a say in what material we included on the tour and the aftermath that we debriefed and continued to have conversations about this space Walker said.

The tours are complemented by a conversation for each residence on the history presented. These discussions will be moderated by members of BRIDGE, an organization of students trained to support difficult conversations about breed. They will start after most visits have ended to give BRIDGE more time to train moderators.

As the organization that led the charge of creating these mandatory visits, HEEAL has been working on this effort for two years. HEEAL is made up of seven third-year women from BIPOC who were inspired to increase awareness of the history of the University of Slave Workers.

Members say their activism at the University began in 2019 after taking a historical tour led by professor of architectural history Louis Nelson. Since then, they have worked with Nelson throughout the development of the educational program.

“To be completely honest it really rocked us, because if we hadn’t had this opportunity to be on this tour, we would never have known that U.Va. had all this hidden history, especially in regards the history of enslaved African-American workers, “Walker said.” This is an education issue and we wanted something very standardized that we knew every student was going to do in and out. of the U.Va. have understood.

While HEEAL members said they expected backlash from students who did not want to attend the tours or from parents who did not think this program should be mandatory for their children, the only comments negatives they have received so far have come from AR who did not want anything else to force their residents to attend. HEEAL heard these concerns, but said he felt the need for students to receive this education was greater.

“I was very grateful for the responses from the students,” Walker said. “On the first date of the tour we had there were 75 students just from Kellog and it was amazing to hear because I was really worried about student engagement and the students were shrugging and thought it wasn’t important to them, but it is. These are the spaces in which we navigate.

After HEEAL expected a negative reaction, they contacted the office of university president Jim Ryan three months ago to request a statement of support for the program. After a follow-up in August, HEEAL did not receive a response from President Ryan himself.

Apart from faculty councils and initial meetings with administrators such as HRL associate dean of students, Andy Petters, this program has been designed solely by students.

“A student came to see me yesterday and said ‘I never would have known that. No class would have equipped me with this information if I hadn’t done this, ”Walker said. “I think that’s the special kind of comment we’re looking for – that eye-opening experience.”

In the future, HEEAL hopes to expand its organization. In order to leave a legacy to the University, they wish to recruit more members who will continue their educational influence once the seven founders have graduated.

HEEAL also hopes to create future tours that further incorporate the history of student activism at the University. Specifically, they intend to work with the Black Student Alliance to include the organization’s advocacy on Grounds since the 1960s, in particular highlighting the list of demands that BSA has requested since the 1970s.

“We want to integrate the story of creating space for black students at U.Va,” said Abena Appiah-Ofori, third-year college student and member of HEEAL. “We want students who go on tour to know that the struggle is still real and that they should always do what they can to support the black community on Grounds and in the wider community of Charlottesville. At the end of the day, we want this to be a call to action.