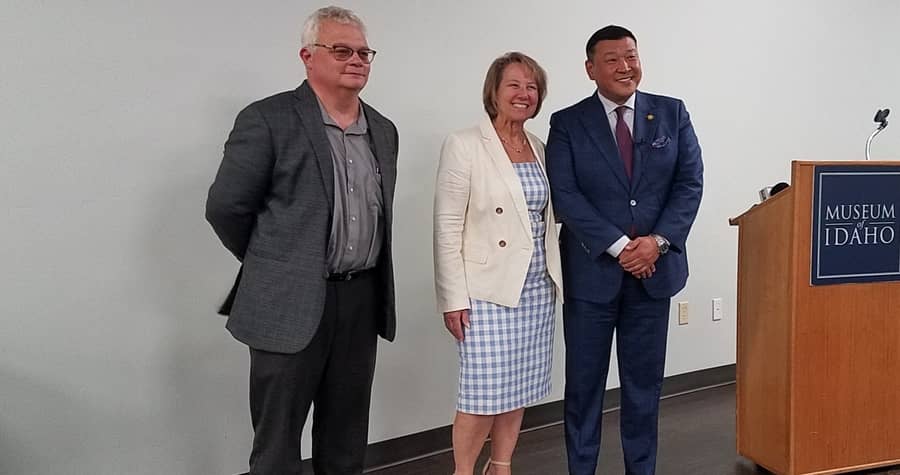 Mongolian Ambassador Batbayar Uliziidelger traveled to Idaho Falls to visit the museum’s current Genghis Khan exhibit. He also presented as part of MOI’s Museum Club program, promoting cross-cultural relations between his country and the United States, while detailing what Mongolia offers as a tourist destination.

It was the first time in MOI’s history that an ambassador from a foreign country visited the museum. Uliziidelger also visited the Idaho Falls Zoo while in town.

“I really see this as an opportunity for cultural exchange between Mongolia and Idaho Falls,” said museum executive director Karen Baker. “I think it’s a great opportunity to share a little piece of Mongolia and the culture. And, you know, we all have pants because of Genghis Khan.

“Through this event, there is a great prospect of increasing cross-cultural understanding between Mongolia and people living in the United States,” Uliziidelger said. “The event deepens the bonds and familiarity between people. With each passing day, interest in Mongolia increases in the United States.

Uliziidelger said much of the increased interest in Mongolia is driven by cultural exports. He pointed to The Hu, a rock group that mixes traditional Mongolian instrumentation with rock music and is rapidly gaining popularity in the United States.

He also mentioned the Genghis Khan exhibit currently on display at the museum. It has been displayed in dozens of museums across the country and has helped deepen the understanding of Mongolian history and culture for many Americans.

Uliziidelger also highlighted the natural and cultural beauty of his country.

“Mongolia is the ‘Land of Eternal Blue Sky,'” he said. “We have 265 sunny days a year but it’s not that hot. Some say Mongolia is Asia’s last wild frontier.

Mongolia is also a mecca for paleontology.

“The most famous is that Mongolia is home to the Gobi Desert, where they found fossilized eggs and velociraptors,” he said. “Have you seen those little things? Very dangerous indeed. They were first discovered in the 1920s.”

“Roy Chapman Andrews, a true Indiana Jones, has discovered many fossils, including a number of new species of dinosaurs,” Uliziidelger added. “Perhaps the most impressive discovery, however, was the first scientifically recognized dinosaur eggs.”

Uliziidelger highlighted the qualities that make Mongolia a great undiscovered travel destination. He said his country is very safe and many Mongolians still embrace aspects of a nomadic lifestyle that are not imprisoned by modern smart devices.

“Even today, Mongolia evokes a time when Genghis Khan and his horsemen thundered across the steppe, establishing the greatest land empire the world has ever seen,” he said.

Uliziidelger describes the Mongolian Naadam festival, which takes place every July, as a must-see event for tourists. The festival consists of three sporting events – archery, horse riding and wrestling.

“Mongol wrestling, horse racing and archery have been the historical game of men for hundreds and hundreds of years, ever since the Mongol Empire,” Uliziidelger explained. “Naadam is not a party or celebration, but the Mongolian people are proud to show off their traditions and nomadic culture.”

While the United States and Mongolia are very different, Uliziidelger said there are important commonalities that bind the two nations.

“History shows that despite the geographic distance that separates us, our lands and the United States have always been closely linked by curiosity and mutual feelings, while achieving stronger bonds, of friendship,” he said. -he declares.