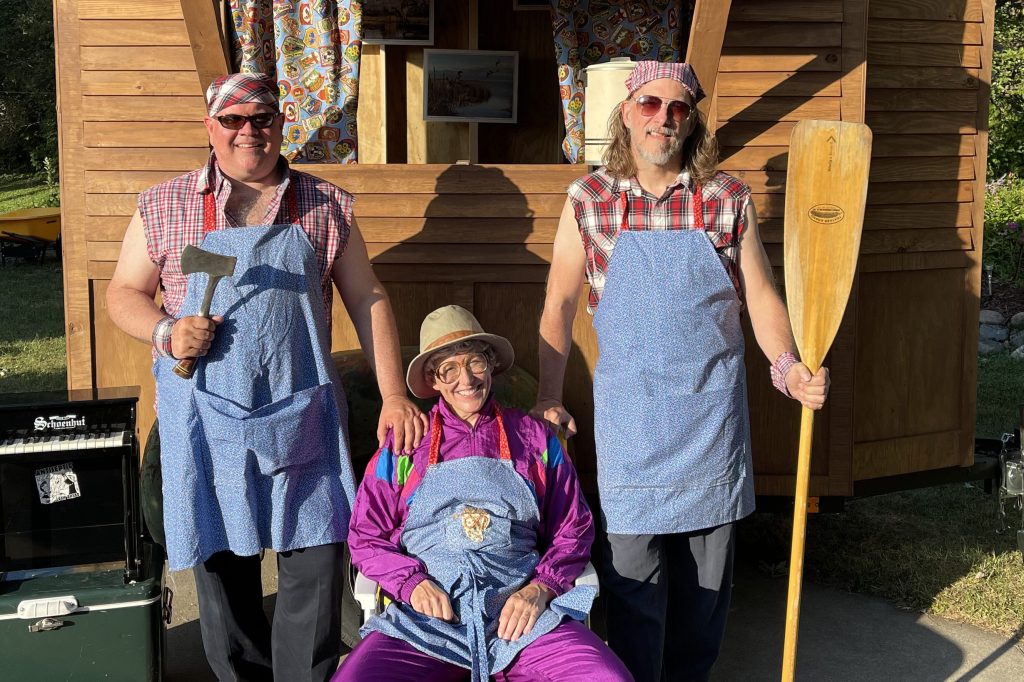 What happens when Arla Mae learns that her booya wagon, which she says was Minnesota’s “original” food truck, may head to the Smithsonian, where he will claim his rightful place among the Important American artifacts? She’s in full swing, but a letter from a museum official says she’ll have to dust off and throw another booya party.

Bringing out a batch of salty stew that has become an iconic edible – a near-sacrament for some – in the Upper Midwest could spell disaster for Arla Mae, an original Northwoods character created by actress Sarah Agnew.

But the “stew that makes you feel brand new” (like a song in musical claims) that will be served at many performances has a secret ingredient: the recipe was created by James Beard Award-winning chef Ann Kim (Pizza Lola , Young Joni, Hello Pizza, Sookie and Mimi). Agnew explains that Kim is a former actor and that the two are longtime friends. When Agnew approached the world-class chef with the idea, she was into it. The public will be able to taste the booya at some of the stops, where community volunteers will prepare a batch. Other places will have food wagons which are likely to serve booya.

Agnew says she didn’t know about booya before she started working on “Arla Mae,” but she likes the concept behind the concoction, which is a kind of community stew, often concocted for fundraisers and gatherings, ” a gastronomic event that is bigger than one thing. “

As for Arla Mae, Agnew says she was inspired by her Canadian grandmother, who spends a lot of time in the woods. Agnew has a photo of her grandmother sitting in a lounge chair in her bathrobe drinking coffee outside a cabin.

“I just love that there’s this woman in rural Minnesota and she’s making big statements,” Agnew said of Arla Mae. The character is larger than life, she adds, and deserves the legendary stature of Paul Bunyan and Babe the Blue Ox.

The musical serves as the backstory for Arla Mae in Koochiching, which Agnew admits she picked for a location because it’s such a compelling name. Koochiching is the second largest county in Minnesota.

Arla Mae’s story has been simmering for a few years, but has been put on the back burner by COVID closures. When the show was unable to debut last summer, Sod House was able to secure a grant to connect with audiences and created three Arla Mae videos, “Cooking with Arla” (check them out on sodhousetheater .org).

“They threw a line at me,” Agnew said of funding the videos.

Sod House works with Minnesota Cooks, a program created by the Minnesota Farmers Union to connect local farmers with chefs and restaurants that feature farm-fresh food on their menus.

Arla Mae’s booya wagon – a wooden structure on wheels with a folding window that currently sits in the courtyard of Sod House co-artistic directors Luverne Seifert and Darcey Engen – will travel to the performances. The cast will be in a 10-passenger van carrying the wagon to outperform performance, Seifert says.

While most theater companies have had to adapt to perform both outdoors and on tour during the pandemic, Sod House shows are mostly outdoors, Seifert points out, including the “Swede Hollow Ghost. Sonata ”from 2019, which was staged at St. Paul’s Park; “An Enemy of the People,” which was performed in 16 locations from 2017-19 and performed in city halls, outdoor parks, and courthouses in Minnesota; and “Peer Gynt,” performed in parks in three remote Minnesota towns in the summer of 2014.

Seifert says he and Engen take on a supporting role at Sod House and work with artists who want to create. They are producers for this show.

The original music for “Arla Mae” was written by Eric Jensen, with lyrics by Agnew. While Koochiching can be fun to say, it’s not always easy to work on the song lyrics, as the actors sang through the tunes during a recent rehearsal: “KOO-cha-ching”? “KOOCHA-ching”? Most of the actors have worked together in productions at Guthrie, Ten Thousand Things, the Jungle and elsewhere, and the collaboration is part of developing new work, Agnew says.

Jim Lichtscheidl on mandolin and guitar, Elise Langer on ukulele, Oogie Push tap dance on a plank on the lawn, Eriq Nelson on tin whistle, saxophone, melodica and Agnew with megaphone and kazoo – the actors tested the music during rehearsal pretending to be Arla Mae’s cooks so it will blow your mind. Extracts of songs, harmonies. music sheets flapping in the garden breeze and lots of laughter – after 18 months away from the stage, the joy of working together was bubbling like a delicious pot of, well, you know.

“The Booya Wagon of Arla Mae”