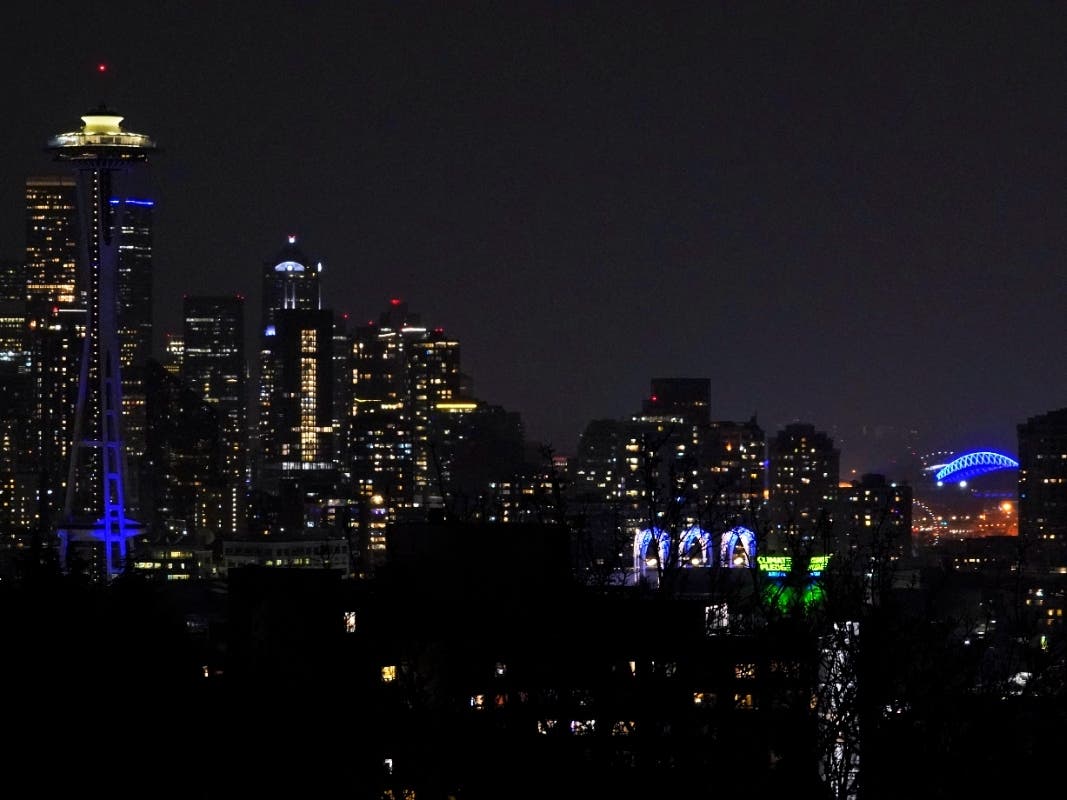 SEATTLE, WA – As Russia continues to lead an invasion of Ukraine, the Seattle area and Washington State have been filled with signs of condemnation of the aggressors and support for the country under attack.

On Monday, Gov. Jay Inslee ordered state agencies to review their current contracts to determine if they had business with Russia and Russian-backed companies that could be canceled, according to KOMO.

“This can’t hold,” Inslee said. “And the whole world must be united in this regard.”

Inslee and many other state politicians condemned the invasion when it began last week.

Nearly 1,000 demonstrators lined up in the rain Saturday afternoon under the Space Needle in Seattle to protest the Russian invasion. The crowd included many Ukrainians, Ukrainian-Americans and immigrants from other Eastern European countries, according to the Seattle Times.

Landmarks around Seattle and Washington were illuminated in the Ukrainian colors of blue and yellow, including:

During Sunday night’s Major League Soccer season opener between Seattle Sounders FC and Nashville SC, Sounders players warmed up wearing shirts who said “no war” and featured a photo of the Ukrainian flag.

Even Rick Steves of Washington, Edmonds-based travel writer, tour guide and TV personality, announced he had canceled this year’s tours that include a stopover in Russia.

“Russia’s aggressive action is heartbreaking for the death, suffering and economic turmoil it will cause in Ukraine and, indirectly at least, beyond,” Steves wrote in a blog post titled “Comrades No More: Reflections on the Russian Invasion of Ukraine”. “

Steves added, “Our mission at (Rick Steves’ Europe) is to help Americans get to know and understand our neighbors better through travel. But when we bring travelers to another country, we also bring their dollars – dollars that would support Putin’s aggression. Therefore, to date, we have canceled all 2022 tours that include a stopover in Russia.”

According to Travel and Leisure, Steve’s business was was to lead trips to St. Petersburg, Russia as part of the “Best of St. Petersburg, Tallinn and Helsinki in 9 Days Tour”, which was to begin in May with full departures through September.