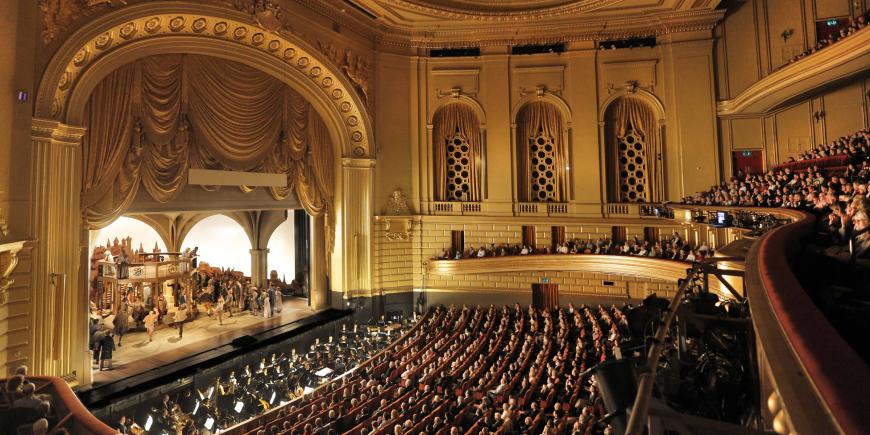 According to a ticket from the San Francisco Opera Archives, the price of Orchestra Row G/Seat 18 from the War Memorial Opera House on opening night on October 15, 1932 was $10.

(This reporter would be remiss if he didn’t also mention the design—another $10 opening night ticket to the War Memorial, Grand Tier Row C/Seat 9—on his old beach towel from the Ala Moana Center d ‘Honolulu.)

According to a press release from SF Opera last week, when the company centenary season begins on September 9, 2022, many places will be available for… $10.

There’s a lot to unpack here.

— The War Memorial opened in 1932, but SF Opera was founded in 1923performing in the Civic Auditorium, justifying the centennial designation of 2022-2023.

— “A Few Seats” in September at the world premiere of John Adams Antony and Cleopatra can cost several hundred dollars and be available only through donations.

— If all seats cost $10, how many would have to be sold to make up the company’s operating budget of approximately $80 million for the season? (Apparently 8 million, which would require 2,667 performances in the newly refurbished 3,000-seat opera house.)

“As the company celebrates 100 years of opera production in the Bay Area, the Dolby family offers a new benefit to residents. Throughout Centennial Season, $10 tickets in premium seating sections will be available to anyone with a Bay Area mailing address ZIP code (beginning with 940–954) who does not hasn’t attended the San Francisco Opera in the past three years. The Dolby Family is generously offering 100 “Opera for the Bay” seats for all main stage performances.”

Dagmar Dolby said: “100 years ago, San Francisco Opera was born from the confluence of bold ideas, great artistry and passionate support. As the company now enters its second century, we want to invite people of all ages and walks of life in the Bay Area to experience the art produced by this vibrant institution – their opera company. We hope that the ‘Opera for the Bay’ ticketing initiative will be the catalyst that encourages the newcomer, attracts curiosity about opera and welcomes back those who haven’t been in a while.”

These tickets will be available on a first-come basis on sfopera.com one month before the first performance of each opera, starting August 9 for the “Centennial Celebration Concert” and Antony and Cleopatra. Each eligible resident can purchase up to two $10 tickets for a performance during the 2022-2023 season.

In other SF Opera Centenary news:

Costumes worn on stage by SF opera stars including Leontyne Price, Kirsten Flagstad and Dorothy Kirsten, along with rare photographs, set models and artifacts from the San Francisco Opera Archives, will be on display throughout throughout the year. In partnership with the SFO Museum at San Francisco International Airport, the San Francisco Public Library, the Museo Italo Americano and other community partners, rarely seen treasures from 100 years of San Francisco theatrical history will be displayed in the city and the large bay Public exhibition area.

For the first time, San Francisco Opera provides digital access to a curated selection of historic radio shows, home recordings, archival interviews, and newly captured conversations. “Streaming the First Century” will feature highlights from the preserved audio history of San Francisco opera in four free installments tied thematically to the onstage repertoire of the Centennial Season. Contemporary scholars, performers and company members present each landmark performance, which includes 20th-century work conducted with unforgettable intensity by a local legend, sloppy French romance dusted for a dream cast unique to San Francisco, a banner Puccini night with three iconic artists all making their debuts in a role, and a beloved favorite in one of his most spellbinding and provocative performances, among many others. More details will be announced for the four monthly releases starting in September.

In addition to SF Opera’s 100th season, this year also marks the 90th anniversary of the War Memorial Opera House. To celebrate both anniversaries, the San Francisco Opera opens the doors of its historic home in a free event on Sunday, October 23, to reveal some of the fun and magic that transpires inside the one of the most beautiful theaters in the world. The day’s activities will include musical performances, backstage tours, stage magic demonstrations, an opera treasure hunt and crafts. Bring the whole family and spend the day at one of the Bay Area’s historic community gathering spaces and a world-famous opera house.

This one-night-only event on November 19 offers attendees the opportunity to experience the first act of The traviata in the auditorium, then enjoy a lively after party in the halls, which will be transformed taking inspiration from the remaining parts of the opera, in collaboration with the production’s creative team. Food and drink specials, dancing and selfie-worthy moments will complete this immersive encounter designed to transport guests into the decadent setting of Verdi’s masterpiece.

The opera in you

Opera stories can reveal amazing journeys and teach us empathy. Opera is large-scale storytelling where big ideas and big emotions make us laugh, cry and comfort. Whether it’s dramatic stories of triumph, survival, perseverance or hope, everyone has a story to tell, no matter their age or background. San Francisco Opera’s Department of Diversity, Equity and Community runs The Opera in You, a new storytelling program to uncover the stories that are within each of us. Through alliances with partners including the Ruth Asawa School of the Arts and the San Francisco Public Library System, anyone can participate in free 5- or 9-week workshops on memoir writing and storytelling ( space permitting; tools will also be made available online) . Participants will have the opportunity to dive deeper into the creative experience with their stories and share them with the audience.

Bohemia out of the box

An abridged version of Puccini Bohemian will travel around the Bay Area in a converted shipping container and will be performed by the Adler Fellows of San Francisco Opera in Italian with English narration and keyboard accompaniment. These free performances on a state-of-the-art mobile stage will bring powerful emotions and soaring tunes directly to communities in a relaxed and intimate environment. Dates and locations will be announced shortly.