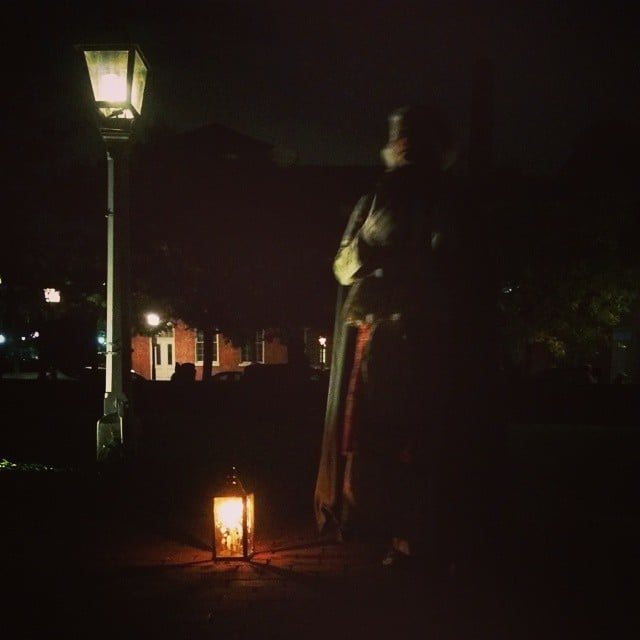 It’s a dark Saturday night, and I’m across from the Treasury, in a canyon of white-stone federal buildings, looking for my ghostly guide. I imagine him to be some sort of Charon character, a hooded man who half a dozen times a weekend takes tourists into the realm of the supernatural for $30 a pop. Families march with Cheesecake Factory bags, protesters carry signs about Iran, and then I see him: a masked man in a gold-embellished tricorn, a puffy white shirt with elaborate cuffs and a glittering patchwork vest in the light of his fake lantern—more Paul Revere than Charon, but with a televangelist-style microphone strapped to his cheek.

Like butterflies in the light of the lantern, we are 26 to gather. “I’ve always been interested in the supernatural,” explains the guide, before asking us to raise our hands if we’re from the area. We all do it except six. “Oh, well,” he said. “I’ll show you the White House anyway.” It’s the first sign of boredom: he keeps us away from the bar where this party is supposed to start.

You see, it’s a alcoholic ghost tour – a downtown pub crawl that appears educational on your credit card statement (ghosts are tied to history and all), but also has a key practical effect: drinking confuses our perceptual abilities, which which makes it slightly more plausible to “see” a ghost. Let me say I don’t believe in ghosts, but I’d like to change my mind. To the good minds of the District of Columbia: You may consider this a challenge.

Apparently the first bar was too crowded to accommodate our group, so now we’re standing outside the White House as Paul Revere shouts into his microphone about embarrassing things like the spirit world. I know, it’s a ghost tour; this is literally what I signed up for. But, to be honest, my attitude usually improves with a beer.

It doesn’t help that my only previous ghost tour ended so badly. It was years ago, in New Orleans with my high school friends, and – as is often the case when you’re “in New Orleans with your high school friends” – the disaster was entirely from our fault. The big mistake was believing our friend from California who claimed the edibles were sweet.

We ate them on Bourbon Street and then drove to a fountain on the outskirts of the French Quarter. At first, everything seemed to be fine. It was a low-key family affair: parents and children, elderly people, our group behaving with admirable decorum as the guide recited the rules. A few rules on a ghost tour seem normal – stay with the band, don’t touch anything historic, keep the chatter soft – but on this tour the rules were exhaustive, at least 15 minutes of them, theatrically explained by a young woman who seemed to revel in our captivity, like Satan arguing before a room full of souls. It was during “period” that the drugs crossed the blood-brain barrier, dooming our supernatural night.

First came our friend’s agitation. “These people aren’t here for the ghosts,” she said suspiciously, “they’re here for the rules. They like rules. Surrounded by the authorities, she panics and refuses to settle down. At one point, still during her period, she confessed that “I can’t tell anymore if I’m in public or in private”, seeming to be really scared. Apparently she thought she was actively pissing his pants, but every time she checked, they were dry.

We thought this rowdiness would pass, or at least become less noticeable once the tour started. But that was not the case. The first ghost story was lost because of our multiple rule violations: irrepressible laughter, episodes of wandering away from the tour. No longer fit for public consumption, we said goodbye as politely as possible for seven people departing a tour of 20. We saw no ghosts. We gave Venmo a hearty tip. When our Uber driver realized what was going on, she grabbed herself an edible for the road.

My ghost tour experience in DC was kind of the opposite logistically – totally sober, I sat through the whole tour, barely a trickle of rules – but it was broadly similar: no ghosts, a kind of drag. It wasn’t the fault of Paul Revere, who knew his material cold and did his best to keep his flock in good spirits while trying – and largely failing – to get us liquid-type spirits.

The first bar, as I said, was too crowded. The next one had ended the previous tour, so it didn’t seem safe to try again. By this point the troops had become restless: we were halfway there and needed, as Paul Revere put it, our “potable drink.” To appease us, he passed around chintzy EMF readers – a Ghostbusters-style gimmick – which, seemingly at random, would flash red.

It was in this state of mind that we arrived at the Willard, a chic hotel with a rich political history: it was here that Martin Luther King wrote his “I have a dream speech”, where Rudy Giuliani locked himself in to plot the overthrow of the 2020 election, and, allegedly, where President Ulysses S. Grant coined the term ‘lobbying’ to describe the sycophants who harassed him for favors as he tried to get drunk in peace. I, too, wanted to drink in peace in the lobby of the Willard, but as we walked through the atrium, a problem arose: a pale, skinny man in a smart dark suit – a manager, not a ghost – walked towards our group with great concern, blocking our way to the bar.

He and Paul Revere indulged in feverish whispers, and then the manager took a few steps back as the guide broke the news: We could go to the bar, but not all at once, only in pairs or small groups. For a crew of 26 this was going to take a while – yet another blow to our deteriorating night. Nonetheless, three ladies took a drink break while the rest of us settled into a nook at the back of the lobby. Our flock of sweatshirts passed women in ballgowns and men in tuxedos as orchestral music floated softly through the air.

As we waited, our poor, beleaguered guide described as enthusiastically as possible – on tiptoe delicately between “audible” and “not loud enough to give us the axe” – a demon cat that would appear in the Capitol, but at this point I was barely listening. Instead, I watched an older woman stare at the electromagnetic meter sitting in her hand. When my opportunity for an “alcoholic beverage” finally presented itself, I turned it down; I was too demoralized. I wasn’t going to see a ghost.

That’s when I thought back to New Orleans. The night before the ghost tour, we had done a pub crawl on Bourbon Street – a fake bachelorette party where we each pretended to be the bride in a different bar – and in one of them , we left our friend’s number on a napkin for the bartender. He called her on his way out of work. This bartender was a lovely man, a sweet man, a sweet man – a man who kind of took graciously when I drunkenly told him he looked like Lee Harvey Oswald. The only time I saw him bristle was when we mentioned our ghost tour plans.

“Ghosts aren’t real,” he said, and a few members of our group took umbrage. They argued not that he was wrong, but that such sweeping proclamations should not be made, that these phenomena are understood differently in different cultures, that denying the popular wisdom of ghost stories is ugly and narrow-minded . A thankfully unsentimental person, he replied, “This town is going to be under water soon because people refuse to believe in science, so no, I’m not going to please ‘ghosts'”.

That’s an excellent and noble objection to ghost tours, but it’s certainly not mine – my complaint is aesthetic: for the most part, the stories aren’t good. They all seem to exist at the cursed crossroads of “not particularly pungent” and “obviously false” historical anecdotes.

Outside the Willard, Paul Revere turns on his microphone – “We got a lot of looks in there,” he jokes – then points to the Waldorf Astoria across the street. Apparently generations ago the postmaster fell down the elevator shaft and now the mechanism is faulty – stopping between floors, flickering lights, that sort of thing. Does this anecdote have historical value? No. Scary ? Unless you’re actually in the elevator. I know I’m a scrooge and I’m sorry. But if a story isn’t uplifting or entertaining, then at least I’m going to need some booze.