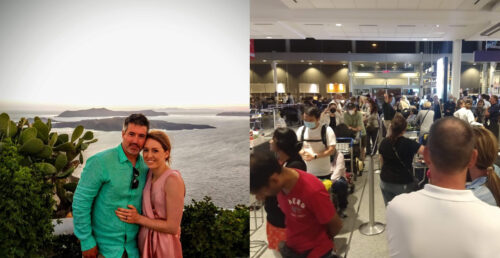 A woman who traveled to Greece for her sister’s wedding says her trip turned into a nightmare after she had to replace her bridesmaid dress and extend her trip after a long, delayed and chaotic journey, while flying with Air Canada.

End of June, Kailey Hagen left her 15-month-old toddler with her in-laws and traveled with her partner, Ryan, to Santorini, Greece, for her sister’s wedding.

From northern Wisconsin to Minneapolis, the two drove four hours, flew with Air Canada to Montreal, then to Athens before taking a short flight with another carrier to Santorini.

After some delays, the couple made their way to Athens and entered the baggage claim area “into an ominous sea of ​​lost baggage surrounding each carousel”.

Hagen soon learned that their bags had been lost somewhere between Minneapolis and Athens.

In the lost bag was this bridesmaid’s bridesmaid dress for the wedding.

After waiting in a long line for luggage tracking, Hagen says a staff member admitted she didn’t know where the luggage was, but opened a claim for the couple and gave them a WorldTracer code which allows passengers to track their luggage.

“Then she promised to send the bags to Santorini airport as soon as they were found,” Hagen said.

But that was the last time on their trip that they would receive a baggage update from the airline.

Exhausted and jet-lagged after their flights, when they arrived in Santorini, the two had to shop for clothes and toiletries in Fira’s bustling markets, Hagen said.

“If you’ve never been there, Santorini has a great climate, great food, and kind, welcoming people. But it’s not the kind of place you want to replace your wardrobe. We spent most of our trip looking like walking advertisements for the island and basic items, like bras, were impossible to find,” Hagen said.

The day before her sisters’ wedding, Hagen said the entire wedding party scoured the island for a replacement dress.

“Fortunately, they were able to find one that didn’t stand out too much from the others.”

Kailey Hagen, in her new bridesmaid dress, and partner Ryan in Greece. Courtesy of Kailey Hagen.

After the wedding, Hagen and her partner began their journey home – with the same scheduled stops as in Greece.

During their stopover from Athens to Montreal, she visited the baggage claim counter again.

After another long queue alongside others with similar experiences, the staff member asked those traveling with Air Canada to search through a baggage area filled with hundreds of bags, Hagen said.

“Fortunately, wWe found our bags,” she said. “We suspect they arrived in Athens the day after we arrived, but no one from Air Canada had bothered to check them in. We were lucky to be the ones who found our bags.”

However, all was not peaceful for the rest of their journey.

Flights were delayed, the two were rerouted only to find their last flight to Minneapolis had been cancelled.

“At this point we had been away from our 17 month old son for over a week and for over 24 hours longer than we should have been away. We had to struggle to arrange childcare while figuring out how we were going to get home,” she said. “We decided we couldn’t trust Air Canada anymore, so we took matters into our own hands.”

“We wouldn’t have paid if we had had another choice.”

The two then drove from Toronto to Flint, Michigan.

Shortly after the two men started driving, they received a message from Air Canada saying it had automatically booked them a flight to Philadelphia with a connection to Minneapolis.

Hagen attempted to call and cancel his flight several times, but couldn’t even wait with Air Canada because an audio recording indicated the call volume was high at times.

When they were able to put themselves on hold, the call “unexpectedly disconnected due to no error on [Air Canada’s] end.”

After dropping off their rental car, her partner’s friend who is a pilot finally flew the two to four hours home in a 60-year-old four-seat Cherokee plane through a thunderstorm over Lake Michigan.

“It may sound scary, but my relief at not having to fly Air Canada anymore overwhelmed all my other emotions,” she said.

After his long and tedious experience traveling with Air Canada, Hagen advises travelers to avoid checking their bags or, if they do, “consider getting an Apple AirTag or other GPS device for your bag. so that you can follow it yourself”.

“Take photos of your bags…and write down the branding in case you need to file a claim. Pack extra clothes and your toiletries in your hand luggage. Don’t be afraid to book extra-long layovers for yourself,” she said. “You can’t rely on airlines to watch over you, so you have to take every precaution possible.”

In a response to Daily Hive Urbanized, Air Canada said: “In rare instances where baggage is delayed or separated from customers, it is important that people traveling ensure they have a durable identification tag attached to their luggage. luggage, with their contact details, and we also recommend that they also include identifying information inside their luggage.

The airline says most customers arrive at their destination with their luggage.

Stand in line at the Montreal airport. Courtesy of Ryan Hagen.

Hagen told Daily Hive Urbanized that she understands the pressure airlines are currently facing is an industry-wide issue and is causing a breakdown in communication. But she said she thought Air Canada “seems to be a little worse than some of the other airlines.”

“It was really difficult to reach anyone to get information about what was going on with their flight, their luggage. And I think that’s just because they’re dealing with so much right now that it is simply impossible for them to reach everyone.

Air Canada said it maintains a “robust customer communication strategy” by keeping travelers informed of their flight details, including any changes.

“That’s why it’s important that guests make sure to provide us with an email or text address where they can be reached during their trip…We also ask for this at check-in.”

The airline says it has taken steps in recent months to improve communications with new policies so that customers can change their flights free of charge to give themselves more time to make connections.

Hagen and his partner have filed several claims with Air Canada. The airline said it would reimburse them for their baggage costs and the clothing and items they had to buy to replace their lost items. However, the couple have not heard of reimbursement for delayed and canceled flights.

8 Comfy and Chic Travel Outfit Ideas, According to Beyoncé’s Stylist

David Freeze Day 8: Things are looking up, with a busy day – Salisbury Post